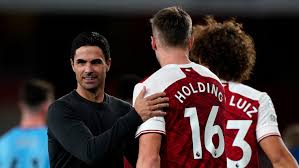 The Sun.co.uk reports that the ex-Gunners defender backed his fellow Frenchman to turn Arsenal around after a miserable start to the season.

Arsenal have failed to win in their last six Premier League games and are languishing in 15th place.

Arteta, 38, has been at the helm for a year and guided Arsenal to FA Cup glory last season, but has found the going more difficult this term.

And Gallas, who played over 100 games in four years at the Emirates, said Arteta’s lack of experience is showing.

He told Ladbrokes: “I think maybe the issue at the moment is that Mikel Arteta is not the right manager.

“For me he doesn’t have that experience to manage a big club. I was surprised when he came in, to be honest – even as Pep Guardiola’s assistant – you need experience as a manager to come in to a club like Arsenal.

“When they chose Mikel Arteta to come in and replace Unai Emery, in my mind Patrick Vieira was the name I thought they should have gone for.

“I don’t know how close he was or if he was in the running at all, but I was surprised they didn’t even mention his name.”

Vieira is a former club captain and legend at Arsenal and was part of three Premier League winning teams.

Since retiring he has managed New York City in the MLS and French outfit Nice.

Gallas added: “Patrick has more experience than Mikel, because he’s managed in America and he spent time at Nice.

“So when the Arsenal board decided to pick a new manager I thought Patrick would get the call.

“He was captain of Arsenal and he knows the club very well. Patrick was the right guy then.

“If they have to sack Mikel Arteta, they have to choose Patrick Vieira to replace him, and I’m sure all the fans would love it.”