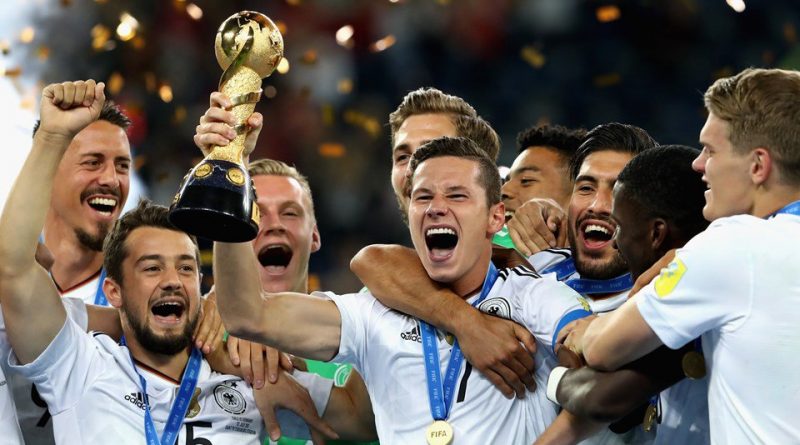 Germany battled their way to the 2017 FIFA Confederations Cup title on Sunday, beating Chile 1-0 in a tight final in Russia, according Bleacher Report.

Lars Stindl gave the Germans a first-half lead against the run of play, taking advantage of some dreadful defending.

Chile went close on several occasions after the break, but their top stars faltered in front of goal.

La Roja came out with intensity and threatened early, with Alexis Sanchez putting Marc-Andre ter Stegen to work with a shot from range. Arturo Vidal could have opened the scoring after just five minutes, running into Ter Stegen, and the Bayern Munich man went close again with another hard drive.

Die Mannschaft made one mistake after the other but weren’t punished, as Sanchez should have finished a routine rebound after a poor save by Ter Stegen but somehow missed the target.

Chile tried to respond, and Charles Aranguiz came within inches of deviating a cross home. On the other side of the pitch, Leon Goretzka blasted a shot wide, and the midfielder should have done more with the chance.

Julian Draxler pulled a shot wide before the final chance of the half fell to Goretzka, who nearly took advantage of another horrendous miscue, this time by Gonzalo Jara.

Draxler nearly pushed the first chance of the half in goal before tempers flared, as Joshua Kimmich went into Claudio Bravo and the Chileans responded in kind. Vidal was booked for shoving his Bayern team-mate, who also saw a yellow card.

There was more controversy regarding the VAR system in store after Eduardo Vargas missed another big chance. Sanchez hit the turf right as Vidal blasted a shot over the bar, and La Roja were livid when the official did not award a penalty. Replays confirmed it was the right decision, but the South Americans were outraged nonetheless.

Angelo Sagal missed a golden opportunity to tie things, as his half-volley failed to find the target, and more handbags followed, with Emre Can holding on to the ball and earning himself a booking for his troubles. Bravo didn’t enjoy that one bit, and he too was booked for his reaction.

Die Mannschaft will have the chance to become the first Confederations Cup winners to also win the World Cup the following year when they defend their 2014 title in Russia in 2018.