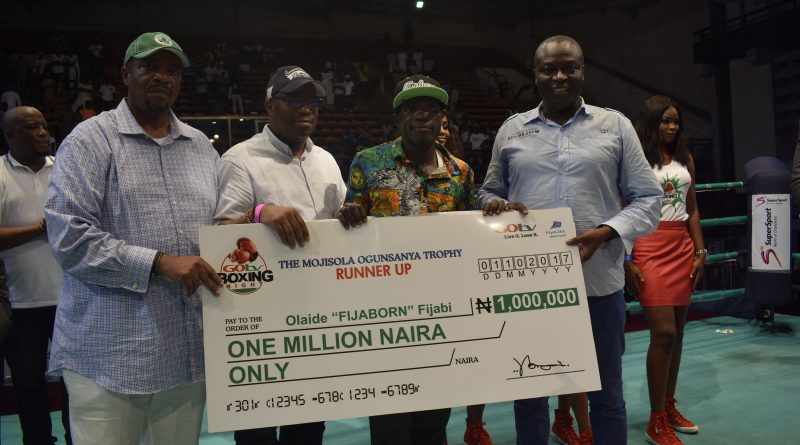 Winners of the cash prizes for the Best Boxers at GOtv Boxing Night 12, Stanley “Edo Boy” Eribo, Olaide “Fijaborn” Fijabi and Oto “Joe Boy” Joseph have hailed the sponsors for their commitment towards taking Nigerian boxing to a new height.

The three boxers were voted by journalists as the best boxers at the event, which held at the Sports Hall of the National Stadium, Lagos, on Sunday.

Edo Boy, who defended his African Boxing Union welterweight title, emerged the best boxer after defeating Ramadhan Shauri of Tanzania in a tightly contested bout. He won by a unanimous decision after a captivating 12-round contest. He won N2.5million cash prize attached to the Mojisola Ogunsanya Memorial Prize for the best boxer of the night.

Speaking in Lagos on Tuesday, Eribo thanked the sponsors and organisers, for the opportunity which has earned him the highest pay-out in the Nigerian boxing history.

He said, “But for GOtv, I would have been an obscure boxer, fighting just for passion and not for a living. Today, I am celebrated all over Africa. I appreciate the commitment of the sponsors and organisers. My next goals are to win the Commonwealth and world welterweight titles soon.” he said.

The second-runner up for the best boxer, Fijabi, who also defended his West Africa light welterweight title against Ben “Congo Soldier” Ankrah of Ghana, got N1 million cash prize. In another tightly-contested bout, Joe Boy defeated Israel “Money Machine” Kammwamba of Malawi to make history as the first ever winner of the Commonwealth Africa lightweight title and also, emerged the second runner-up with N500,000 cash prize.