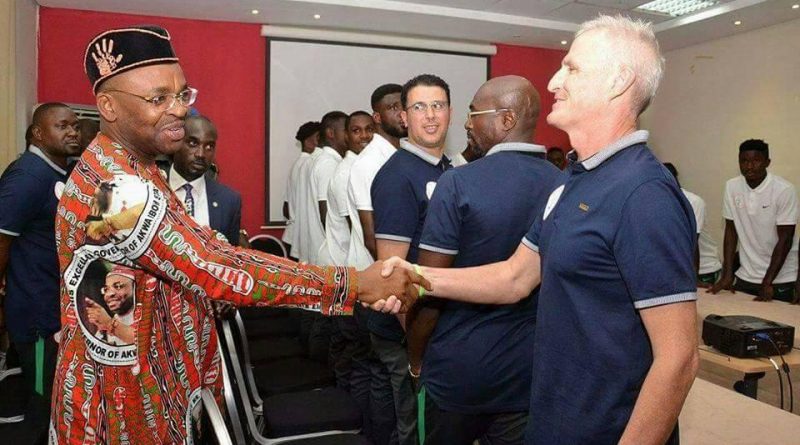 The Akwa Ibom State Governor, Mr. Udom Emmanuel on Wednesday redeemed his pledge of $10,000 per goal for the matches against Cameroon to the Super Eagles. He then called on the three-time African champions to go all out for a win against Zambia on Saturday and expect “a handsome reward” from him.

The Governor had promised the players the sum of $10,000 for every goal, two days before their clash with the African champions, whom the Eagles thrashed 4-0 in Uyo on the first day of September, before earning a 1-1 draw with the Lions in Yaoundé three days later.

The Governor whose state has been host of the Eagles in this qualifying campaign, said there will be more money if the team earns a sixth FIFA World Cup appearance by beating Zambia on Saturday.

“I know you have the quality to overcome in this important match, but I don’t want you to under –rate your opponents. I love the professionalism and dedication to the cause that you have shown since the beginning of this qualifying campaign. Those efforts have put Nigeria at the top of the table.

“I want to commend the NFF, your coaches and the support staff for the great job they have all done in support of your efforts to get to this position. You are just one win away from achieving your goal. The Zambians are taking this game as a do-or-die affair, so we need to be totally focused and play like soldiers.”

Responding on behalf of the team, captain Mikel Obi thanked the Governor and pledged to him and indeed Nigerians everywhere that the Eagles would not disappoint them on Saturday.

“We very much appreciate the role Your Excellency, the Government and good people of Akwa Ibom State, the NFF and Nigerians from all walks of life have played to get us to this position in this campaign. We know how much this match means and we will go out there and do the job.”