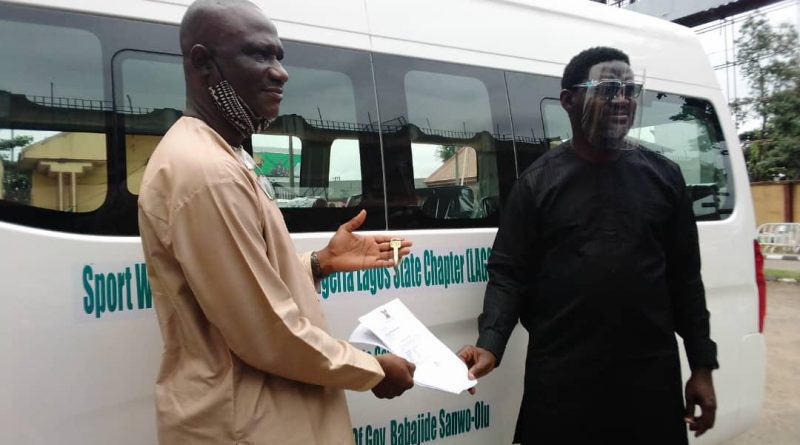 Lagos Governor Gov. Babajide Sanwo-Olu has presented a brand new 18-seater executive bus to the state’s chapter of Sports Writers Association of Nigeria (SWAN). This is in fulfilment of his campaign promises.

The Governor had during his governorship campaign in 2019 promised Lagos SWAN a brand new 18-seater capacity bus.

The Director-General, Lagos State Sports Commission (LSSC), Oluwatoyin Gafar, made the presentation on behalf of the governor to the Lagos SWAN Chairman, Debo Oshundun on Wednesday in Lagos.

“The gift is in fulfilment of the campaign promises in the area of sports development in Lagos State and Gov. Sanwo-Olu has delivered. He has said that every promise made will be fulfilled.

“The bus is a reward for hard work by the Lagos SWAN members. They truly worked to earn it and this is the recognition of their work.

“The state government is desirous of human and capital development of sports which has formed one of the cardinal blueprints of the present government,” he said.

In his remarks during the presentation, Lagos SWAN Chairman, Debo Oshundun, commended the state government for fulfilling its promise, adding that the bus would be put to optimal use.

He said, “During the campaign tour by the governor, he asked for our needs and we requested for some things, especially a befitting bus, and he has now delivered on his promises.

“We should have even received the bus before now, about six months ago, but the COVID-19 pandemic denied us of having it as at when due.

“I can only thank the Lagos State Governor for keeping to his promises. It shows that he is a man of his words.

“We have good relationships with the state government and we promise to continue to do so by contributing positively to the development of sports in the state.

“It is important that we place it on record that the Lagos State Government and the State Sports Commission have always been there for us all the time we need them.

“During the very intense period of the COVID-19 pandemic, we got some of the best materials as palliatives in the country.

“As for the bus, we will make judicious use of it, and it will not be converted to any personal use but collective use.

“We will deploy the bus as part of the image of the association for competitions, such as league matches, marathon races and other competitions.”