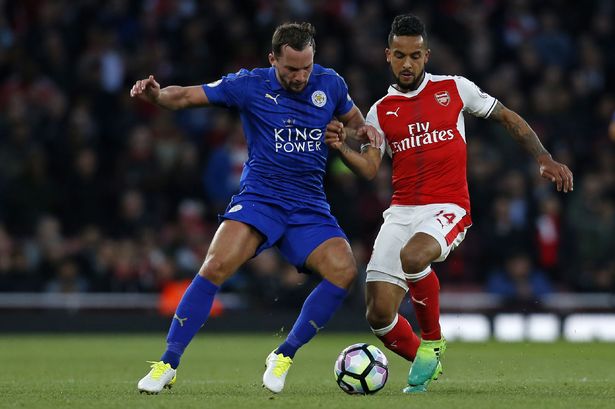 Arsenal erased a pair of deficits to open the Premier League season with a thrilling 4-3 win over Leicester City at the Emirates on Friday night.
Substitutes Aaron Ramsey and Olivier Giroud scored in the 83rd and 85th minutes respectively to overturn Leicester’s lead and put Arsenal top of the table ahead of the weekend action, ESPN reported.
Arsenal new boy Alexandre Lacazette opened his account in the opening minutes, but Shinji Okazaki quickly equalised for Leicester before Jamie Vardy put the Foxes ahead. It was also the game Nigeria’s Kelechi Iheanacho made his Premier League debut for Leicester after last week’s move from Manchester City.
Danny Welbeck was able to equalise just before the break, but Vardy’s second of the night had Leicester ahead again before the late heroics from the super-subs.
With the injured Alexis Sanchez looking on from the stands, Arsenal took the lead inside two minutes as Mohamed Elneny’s cross to the centre of the box found Lacazette, who flicked a header inside the post.
The £52 million signing became the first Arsenal player to score on his Premier League debut since Thomas Vermaelen in 2009.
But the lead was short-lived as Leicester pulled even three minutes later. After playing the ball short from a corner, Marc Albrighton’s cross beyond the far post was acrobatically headed by back Harry Maguire, and Okazaki rose highest to equalise.
Arsenal regained their footing and Welbeck had a number of chances go missing, first seeing his shot blocked after a fine one-two with Elneny, before showing good control to take the ball to the endline, but his cut-back pass could not find anyone.
Sead Kolasinac also had a snapped shot saved by Kasper Schmeichel, but Leicester were looking dangerous on the counterattack and succeeded in taking the lead in the 29th minute.
Albrighton ran onto a poor Granit Xhaka pass and delivered a perfectly placed cross past Petr Cech into the path of Vardy, who could not miss from four yards.
And the visitiors nearly had a two goal lead four mintues later after another counter when Okazaki’s header flashed inches wide of the post.
Arsenal then had a penalty shout as Kolasanic’s shot hit Onyine Ndidi’s raised arm, but Mike Dean adjudged the Leicester man was too close to be able to react.
But the Gunners were still able to equalise on the final play of the first half.
Mesut Ozil played a pass in to Lacazette, who tried to turn and fire, but his shot was fortuitously deflected right to Kolasinac, who unselfishly tapped across for Welebeck to score.
The second half started slowly until Vardy sent another shock through the Emirates with his second goal in the 56th minute.
The England striker was largely unmarked as he rose to meet Riyad Mahrez’s header and directed it inside the back post to put Leicester ahead 3-2.
Arsenal responded positively but Schmeichel was up to the task, stopping Alex Oxlade-Chamberlain’s long shot before getting across just in time to deny Hector Bellerin.
Arsene Wenger then made the move of the match in a 67th-minute double change, putting on Giroud and Ramsey for Elneny and Rob Holding.
Oxlade-Chamberlain had a deflected shot go just wide, and moments later Ozil could only hit the side netting.
But the persistent attack eventually paid off as Ramsey received a cross from Xhaka and had time to take a touch to set up a shot that to level the game a three apiece.
And a minute later Lacazette had the crowd on their feet as he danced around defenders before unleashing a shot that Schmeichel barely tipped over for a corner.
Xhaka sent the ball in and it fell to Giroud, who powered in a header off the underside of the bar, sparking wild celebrations at the Emirates