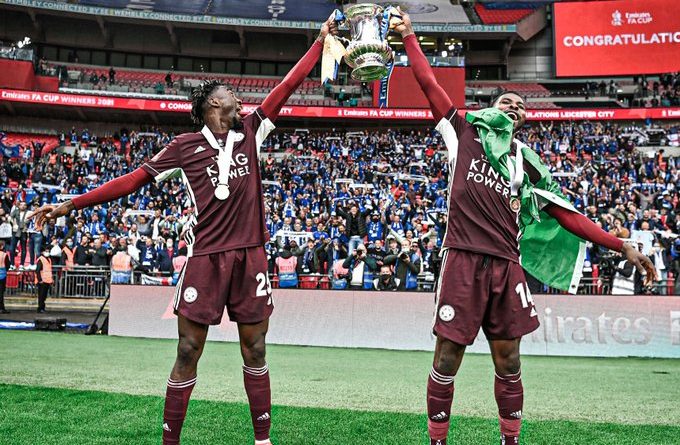 Kelechi Iheanacho and Wilfred Ndidi made history as Leicester City won the FA Cup for the first time following a 1-0 win over Chelsea in the final. The game was played on Saturday at the Wembley Stadium.

Iheanacho might not have scored in the final, but his four goals in previous rounds, including the semi-final win against Southampton, helped the Foxes to get that far.

Ndidi, was brilliant in the middle of the park to help Brendan Rodgers men to a stunning win over Thomas Tuchel and his squad.

Ndidi played the entire game while Iheanacho was on for 67 minutes. Leicester won the game in the 63rd minute with the goal by Youri Tielemans. The Belgian international received a pass from Luke Thomas before firing a rising shot past Kepa Arrizablaga in goal for Chelsea.

Ndidi and Iheanacho became only the second pair of Nigerians to have celebrated The FA Cup win in England, after Nwankwo Kanu and John Utaka triumphed with Portsmouth against Cardiff in 2008.