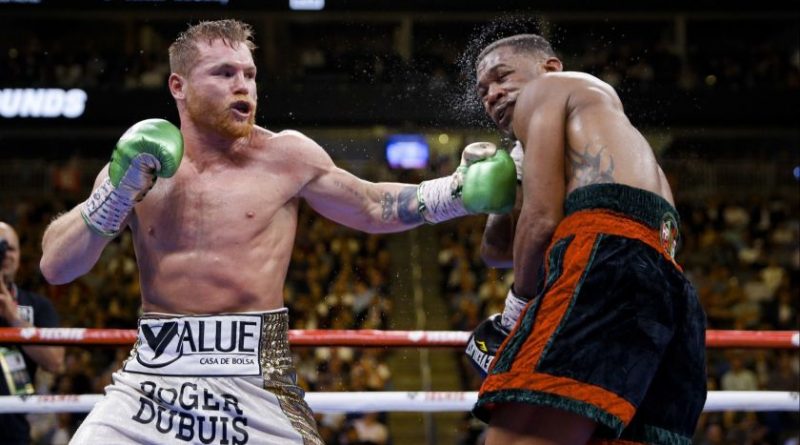 World renowned boxing promoter, Eddie Hearn is expecting fireworks in Miami and Dallas as Canelo Alvarez defends his World Super-Middleweight titles against Avni Yildirim at the Hard Rock Stadium in Miami Gardens, Florida on February 27 and Juan Francisco Estrada and Roman ‘Chocolatito’ Gonzalez clash in a unification rematch at the American Airlines Centre in Dallas, Texas on March 13, both live worldwide on DAZN (except Mexico for Canelo-Yildirim).

Canelo (54-1-2 36 KOs) makes a rapid return to the ring at the home of the Miami Dolphins, taking on his WBC mandatory challenger Yildirim (21-2 12 KOs), with the WBC, WBA Super and Ring Magazine titles on the line.

The Mexican pound-for-pound king defeated former undefeated 168lber Callum Smith in clinical fashion in San Antonio, Texas in December and the 30 year old looks to stamp his authority on the division, with Hearn looking at pitting Canelo against WBO champion Billy Joe Saunders next should Canelo win.

“It’s great to see Canelo so active, especially in the world we live in at the moment, I think it’s a real statement from him,” said Hearn. “He’s mixing it up by fighting in Miami at the Hard Rock Stadium, to be promoting Canelo at the home of the Miami Dolphins is pretty special. We’re going to have around 15,000 in there, Avni is the mandatory challenger and it’s a great opportunity for him and a big opportunity for Canelo to stay active hopefully before a big Billy Joe Saunders fight and on a huge night on February 27.”

Chief support on the night comes in the form of Canelo’s stablemate Julio Cesar Martinez defending his WBA World Flyweight title against his mandatory challenger, McWilliams Arroyo. Martinez (17-1 13 KOs) has been frustrated by injury ruling him out of two previously scheduled defences, so Hearn expects the pintsized tyro to be at his thrilling best in a classic Mexican-Puerto Rican war with Arroyo (20-4 15 KOs).

“Julio Cesar Martinez is special,” said Hearn. “I think he can go through everyone in the division and even move up to Super-Flyweight and start looking at Estrada and Chocolatito, he’s so exciting and I can’t wait to see him in February 27.

“He will fight anyone, and Eddy Reynoso is confident in his ability. He was supposed to fight on the Canelo card in December so he should be hungry. Arroyo was a fantastic amateur with good pedigree and he’s a smart fighter, but I think that the footwork, strength and unpredictability of Julio will see him victorious.”

Elsewhere on the bill, Zhilei Zhang (22-0 17 KOs) faces Jerry Forrest (26-4 20 KOs) over ten rounds: “I’m really excited about Zhilei Zhang, he punches very hard and he’s something different for the division. Forrest is a good Heavyweight and I expect a stunning KO and hopefully it’s from our man Zhang. I think he is getting to the point now where Zhilei needs to fight some of the guys in the top 15 like Derek Chisora, Joseph Parker, Filip Hrgovic and so on.”

Marc Castro (1-0 1 KO) faces Raul Corona (4-2-3 1 KO) over four rounds: “Marc was waiting for so long for that debut that he was a little over-excited in the first round, but when he settled down his shots were fantastic, and I loved the aggression from him. The kid is a star and it’s a big opportunity to have his second fight on a second Canelo card.

Diego Pacheco (10-0 8 KOs) faces Rodolfo Gomez Jr (14-4-1 10 KOs) over eight rounds: “Diego is still so young that you want to hold him back, but we have to progress him forward and we have done so on this card. It’s a big step up and he’s getting a great wave of support growing, Diego is a big star. Sparring is so important for young fighters and Diego is getting great sparring with the likes of Canelo and David Benavidez; Diego has been out for a while, but I expect a big performance.