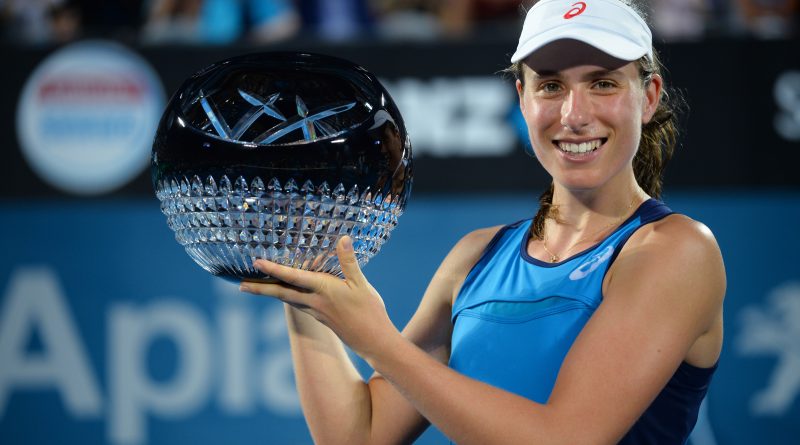 Konta capped an impressive week and an ideal build-up to next week’s Australian Open in Melbourne with a 6-4, 6-2 win over the Polish second seed in one hour 20 minutes.

It was 25-year-old Konta’s second career WTA Tour victory after winning in Stanford last year and she became the first British woman since Jo Durie in 1983 to win in Sydney, AFP reports.

“I was born here in Sydney so this is a very special moment for me,” Konta told the crowd at the presentation ceremony.

It was Konta’s first win over Radwanska, a victory that will lift her to world No.9 when the new rankings are released on Monday.

“I’m just overall happy with how I was able to progress throughout this tournament,” Konta said.

“I felt each match that I was playing I was thinking a little more clearly and was getting that much more match-tight, as the saying is.

“But overall, very happy with the match I played today. I really felt I definitely maintained a high level throughout and I made it very difficult for her to do much today.”

It crowned an outstanding week for the British star after she accounted for Arina Rodionova, Daria Gavrilova, Daria Kasatkina and Eugenie Bouchard to reach the final.

Konta ruthlessly attacked Radwanska’s serve throughout the match, with the Pole doing well to save six of nine break points.

Konta went through her five matches without dropping a set.

“She was just playing unbelievable tennis from the beginning till the end,” Radwanska said.

“And normally you’re thinking that she can’t play like this whole match and it’s gonna be even game or two that you can go forward because she’s gonna have some worse couple of games. But she didn’t.

“Everything was coming better and better, each shot. I cannot be even angry on myself, because I think I was even playing better than in yesterday’s semi-final.”

It was Radwanska’s only loss in her last seven WTA finals over an 18-month period.