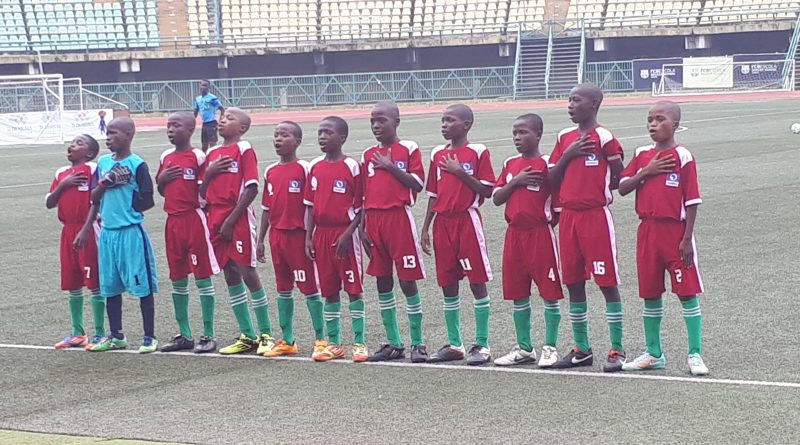 Burahanudeen LGEA Primary School from Kwara and African Church Central Primary School from Ogun State are set to play in the finals of the first edition of the Channels International Kids Cup. The final match will be played on Saturday, May 27th at the Campos Square Mini Stadium, Lagos Island. Third place match will kick off proceedings from 2pm, Extrasportsnigeria.com reports.

Both schools in the final game enjoyed good runs from the start of the tournament and will be hoping to make record by becoming the first team to win the maiden international edition.

The boys from Burahanudeen played in Group B alongside last year’s champion, Kaduna, Rivers and Ekiti. In their first game, they defeated St. Augustine’s Catholic Primary school from Ekiti 2-1. In the second match, they swept aside World Book Model Primary School from Rivers State 2-0 and rounded off the group stage with a 1-1 result against Jaafaru School from Kaduna, who were also a strong force in the group.

In the quarter-finals, the boys from Kwara played a different brand of football that showed they meant business. Playing against the impressive boys from Community Primary School, Imo they showed good character and achieved a convincing 4-0 victory. Waiting for them in the semi-finals was Mowoe Primary School from Delta.

In the semi-finals, Burahanudeen continued where they stopped against Imo. Five minutes into the game, Isiaka Shamsudeen scored the opener for Kwara. But Delta will not go down without a fight and moments later, Oke Ahere drew level with a beautiful header. The first half ended at 1-1.

When the game resumed, it was a post-to-post affair. Ten minutes to stoppage time, the boys from Kwara had a clear chance but Issa Kayode could not convert. But they didn’t have to wait too long when Delta’s defender, Onyema Trinity carelessly handled the ball in the box and gifted Kwara a penalty. Issa Kayode stepped to it and scored to give Kwara a 2-1 victory and a ticket into the final.

For African Church Central Primary School, Ogun, it was a fairytale ride. In their opening Group C match against Abeka Basic 4 Primary School from Ghana, they struggled to play a goalless draw. The other group opponent, Islamiya from Kogi beat Turaki Model School, 2-1 and topped the table.

In their second game, they bounced back to beat Kogi 1-0 and kept hopes alive. In the final group game, they played 1-1 with Sokoto and the five points they gathered was good enough to take them to the next round. Ghana and Sokoto also finished with five points.

In the quarter-finals, Ogun came from a goal down to stun Paragon Demonstration School, Edo 2-1. It was a major upset! In the semi-final match against X-Planter Primary School from Lagos, in ten minutes Oloyede Qudus scored a brace and left Lagos chasing the game. Nababa Abdulsalam pulled one back but it couldn’t stop African Church Central Primary School, Ogun from making it to the final.

The Channels Kids Cup is a grassroots football development programme for boys in primary school under the age of thirteen. The competition became international this year with the inclusion of Ghana and Republic of Benin.