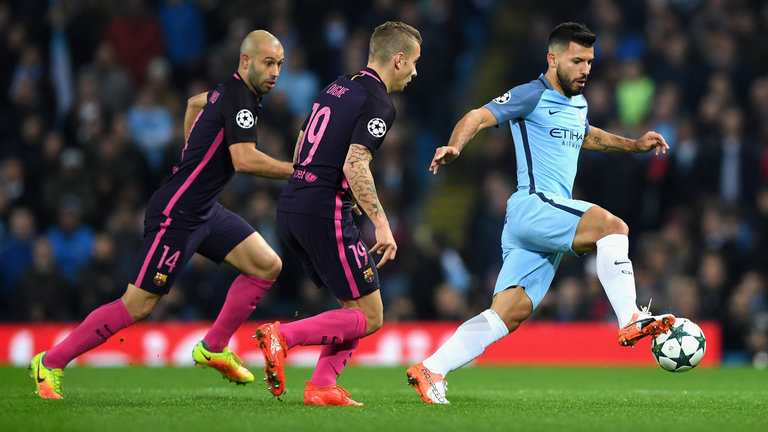 Manchester City manager Pep Guardiola has no qualms about unleashing Sergio Aguero against title rivals Liverpool after his suspension, while John Stones could be fit for the Anfield showdown.

Aguero is poised to return to City’s starting line-up after serving a four-match ban for a dangerous lunge on Chelsea’s David Luiz at the start of the month.

The 28-year-old striker was allowed to spend time back with his family in his native Argentina and Guardiola revealed he would not hesitate to throw him straight back into such a big match.

“He is ready,” Guardiola explained to AFP. “He has come back good from Argentina.

England centre-back Stones was substituted in the first half of City’s 3-0 victory over Hull on Monday after he suffered swelling in his knee.

But after being assessed by City’s medical staff Guardiola remains optimistic about the 22-year-old’s chances of playing against the Reds on New Year’s Eve.

City captain Vincent Kompany is set to miss out with an ongoing knee problem, while winger Leroy Sane is struggling with a knock.

“John Stones is much, much better,” Guardiola said. “Vincent Kompany and Leroy Sane, I think they are not available to play.”

Guardiola personally scouted Liverpool on Tuesday when he attended their emphatic 4-1 victory over Stoke at Anfield.

He has faced Liverpool boss Jurgen Klopp eight times in his managerial career while the pair were in charge of Bayern Munich and Borussia Dortmund respectively.

The Spaniard said ahead of the clash with Liverpool that with Klopp in charge they should be considered as one of the major challengers for the Premier League title.

“Yes, they are definitely a contender. It was a good game I saw,” Guardiola said.

“I saw Liverpool this year many times. But it was my day off, my family was not here and I decide to take a car. Thank you Liverpool for inviting me, for the tickets. I saw the game and that’s all.

“I was lucky to play before against Jurgen and I think we know each quite well.

“I saw the contenders and they are really tough teams. So it will be a good fight until the end of the season.”

Guardiola acknowledged his players must match the passion of their opponents with City winless in their last 14 league and cup games away to Liverpool.

“I don’t know what will happen at Anfield. We have to equal their intensity. Anfield will play a big role,” he said.

Guardiola also refused to comment on whether he believed it was possible for his City team to dominate English football in the manner of the great Liverpool teams of the 1970s and 1980s.

“What happens in the past stays in the past Manchester City is a historic club but a new club in terms of the target,” he added.

“Of course City cannot compare to what Liverpool and (Manchester) United did in the last 30 or 40 years.

“We must go step by step. That is the best way to get better.”