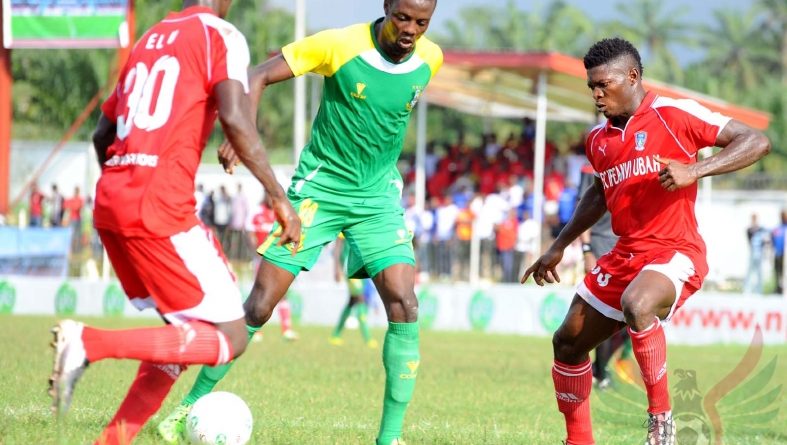 The Nigerian league managers, the League Management Company, have punished FC IfeanyiUbah for walking out of their season opening match against Kano Pillars. The match which was played in Kano on Saturday ended in an embarrassing way as IfeanyiUbah players were asked walk out by their manager minutes into the second half after they claimed their goal was wrongly disallowed by the centre referee in the first half.

Late on Monday the LMC handed out a fine totalling N9.15m while the team would also forfeit three points and three goals from the match as well as a further three points from their future games this season.

LMC announced on their website, “For refusing to continue the NPFL game vs Kano Pillars on Saturday, FC Ifeanyiubah will pay a fine of N3m.

“FC Ifeanyiubah will also forfeit 3 points, 3 goals from the NPFL game which shall be credited to their opponents Kano Pillars.

“FC Ifeanyiubah will further forfeit 3 points from accrued points which will be suspended for a probationary period of the reminder of the NPFL season.

“FC Ifeanyiubah will pay a fine of N5m for hindering and infringing the live TV Broadcast of the NPFL game vs Kano Pillars.

“Also FC Ifeanyiubah will have two points deducted from accrued points, which is suspended for a probationary period of the remainder of the NPFL season owing to hindering and infringing on the fulfilment of the broadcast contract.

“For conduct capable of bringing the #NPFL to disrepute, FC Ifeanyiubah shall pay a fine of N1m.

“Three points shall also be deducted from points accruing to FC Ifeanyiubah for behaviour capable of bringing the NPFL to disrepute. This shall be suspended for a probation period of the remainder of the season.

“FC Ifeanyiubah shall also pay a fine of N150,000 for causing a delay to the restart of the #NPFL game vs Kano Pillars after half time without good reason.”

IfeanyiUbah’s Team Manager Jonathan Igwe who allegedly ordered the walk out was not spared. He was also fined N500,000 and suspended indefinitely from all league matches, while their head coach Yaw Preko was reprimanded.

The club has been given a win of two days to appeal the sanctions.