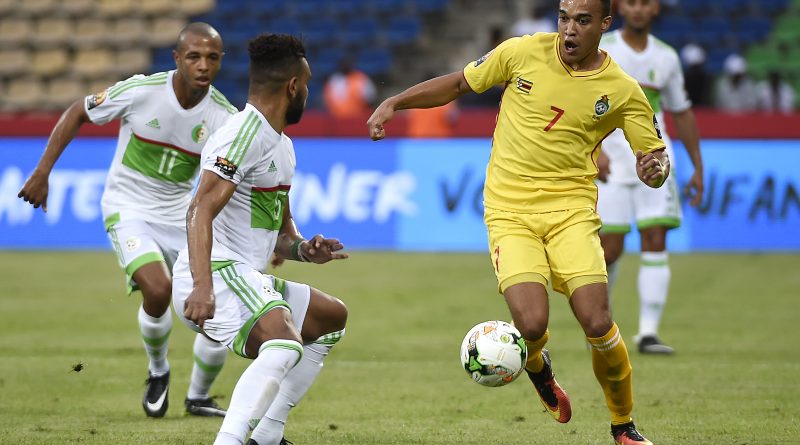 Riyad Mahrez scored twice but Algeria had to settle for a 2-2 draw with rank outsiders Zimbabwe as their Africa Cup of Nations campaign got off to a slow start in Franceville on Sunday, AFP reports.

Newly-crowned African player of the year Mahrez gave Algeria an early lead in the Group B match but Kudakwashe Mahachi quickly equalised and a penalty before the half-hour mark scored by Nyasha Mushekwi had the Warriors in front.

In an action-filled encounter Zimbabwe – whose build-up to the finals was overshadowed by a row over bonuses – were just eight minutes away from claiming a famous victory before Mahrez struck again to secure a share of the spoils.

While Mahrez saved Georges Leekens’ side from a humiliating defeat, the draw was not the best start ahead of games against Tunisia and another pre-tournament favourite Senegal.

Those two sides were due to meet each other in Franceville later on Sunday.

Amid calls from opponents of the government in Gabon to boycott the Cup of Nations there was a sparse crowd in the 20,000-seat stadium in the south-eastern city.

Those who were there witnessed a cracking match, with Zimbabwe recovering brilliantly from a nightmare start.

They lost striker Knowledge Musona to an early injury and then fell behind in the 12th minute as Leicester City star Mahrez ran onto Islam Slimani’s pass and cut inside Costa Nhamoinesu in the area before curling a delightful shot in off the far post with his left foot.

But Zimbabwe were level only five minutes later, South Africa-based Mahachi beating goalkeeper Rais Mbolhi with a speculative low strike on his left foot from the left-hand edge of the box.

Remarkably, they went in front as the half-hour mark approached, Mushekwi sending Mbolhi the wrong way from the penalty spot after a foul in the area by Mokhtar Belkhither.

Zimbabwe won 2-1 in the only previous meeting of the nations at the tournament, 13 years ago, and they missed chances to go further in front in this game.

Only a great save by Mbolhi prevented Khama Billiat from adding to the lead after he had turned Algerian captain Aissa Mandi inside out at the start of the second half.

Algeria then stepped up the pressure and Ramy Bensebaini headed against the bar and Elisha Muroiwa struck the frame of his own goal as he attempted to clear a Faouzi Ghoulam cross.

In between those two incidents Algeria appealed for a penalty as Mahrez went down when he collided with goalkeeper Tatenda Mkuruva in the box.

Zimbabwe looked like they might hold on, but substitute Cuthbert Malajila shot straight at Mbolhi with a great chance and Algeria went straight downfield to equalise, Mahrez’s shot from 20 yards going straight under Mkuruva and in.