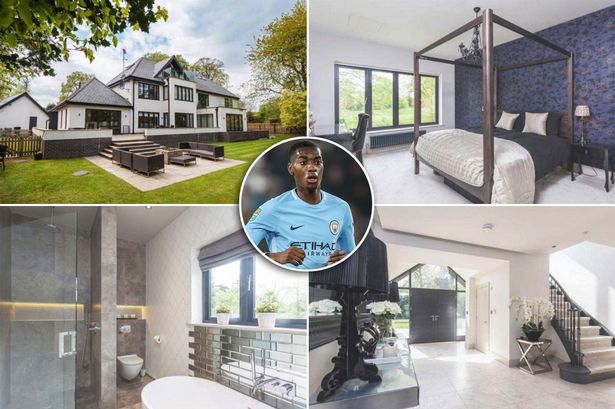 Manchester City’s Nigerian-born youngster Tosin Adarabioyo has reportedly bought himself a £2.25million mansion – before he has even played in a Premier League game.

The 20-year-old defender’s senior career so far has been restricted to just seven appearances in various cup competitions and he was an unused substitute in City’s 2-1 win over Bristol City last night.

Adarabioyo last year signed a new £25,000-a-week contract after he threatened the leave the club, but according to the Sun , has now splashed out a luxury mansion in Knutsford, Cheshire, The Mirror reported.

The three-story property has six bedrooms, five bathrooms, a gym and home cinema and is in the ‘Golden Triangle’ where a host of famous north-west-based footballers reside.

While investing in property is an entirely sensible thing for a young player to do, former Manchester City and Leicester striker Paul Dickov worries that the astronomical salaries paid to young players is taking the ‘hunger’ from them.

“I’m a huge believer of going back to the days when I was an apprentice,” he told talkSPORT.

“You got your grounding, you learnt your discipline, you were cleaning boots and changing rooms and you had to earn the right not just to get in the first team squad but to earn every penny you have got and keep that hunger there. That has slightly gone away from the game.

“You look at the England Under-17s, Under-19s, Under-21s going really well, winning things and everything else, and you want to keep that hunger there and not be given too much, too soon. That is what is happening at the minute and you wonder why they are not progressing.”

Other experts complain that excess cash is distracting the youngsters from the pitch. Nigeria forward Alex Iwobi is now facing Arsene Wenger wrath after spending a whole night out at a party hours before and Arsenal match which they eventually lost 4-2 to Nottingham Forest in the FA Cup.

Adarabioyo was touted as one of the best players at Manchester City’s academy as he rose through the ranks, attracting interest from Everton and Celtic before his brother and agent Gbolahan negotiated his new deal which works out at £1.3million a season.

City on Tuesday night needed a stoppage time goal to beat Championship side Bristol City in the first leg of the Carabao Cup semi-final.

Adarabioyo turned out in the quarter-final win over Leicester last month and also played in their dead rubber defeat to Shakhtar Donetsk in the Champions League.