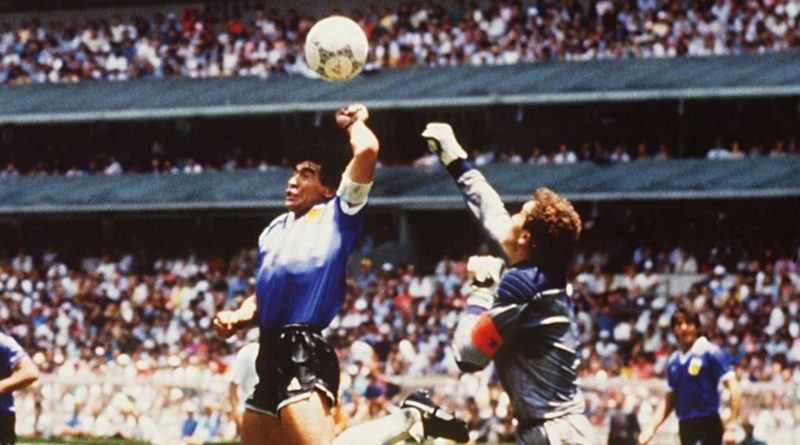 DIEGO MARADONA’S famous “Hand of God” shirt he wore against England in 1986 has sold for £7m auction.

His iconic blue No10 shirt was bought by an anonymous bidder after a month-long online war, and the staggering price tag has made it the most expensive match worn shirt ever.

The winning bid was made in the last minute of the sale, after the £4m reserve had already been matched.

It beat American baseball player Babe Ruth’s New York Yankees top worn between 1928-30 which fetched £4.4m when it was sold in 2019.

Thesun.co.uk reports that the previous most expensive match worn football shirts are believed to be Lionel Messi’s Barcelona top from a 3-2 win over Real Madrid in 2017, which sold for around £360,000 earlier this week, while a shirt worn by Brazil icon Pele in the 1970 World Cup final fetched £157,000 back in 2002.

The late Argentinian superstar scored two goals against England in the 1986 World Cup quarter final in Mexico, and swapped shirts with midfielder Stephen Hodge after the game.

Hodge, 59, put the shirt up for auction with Sotheby’s after it was previously loaned to the National Football Museum.

However, his second of the game went on to be dubbed the “Goal of the century”.

The sale comes after Maradona’s family claimed the Three Lions midfielder had the shirt he used in the first half, and not the Hand of God shirt.

But Sotherbys said they had verified beyond doubt that Hodge has the authentic shirt.

Also yesterday in a last-ditch attempt to stop the shirt being kept in the UK, an Argentine delegation arrived in London to try and grab it for a Maradona museum in Buenos Aires.

Hodge said previously: “I have been the proud owner of this item for over 35 years, since Diego and I swapped shirts in the tunnel after the famed match.

“It was an absolute privilege to have played against one of the greatest and most magnificent football players of all time.

“The Hand of God shirt has deep cultural meaning to the football world, the people of Argentina, and the people of England and I’m certain that the new owner will have immense pride in owning the world’s most iconic football shirt.”