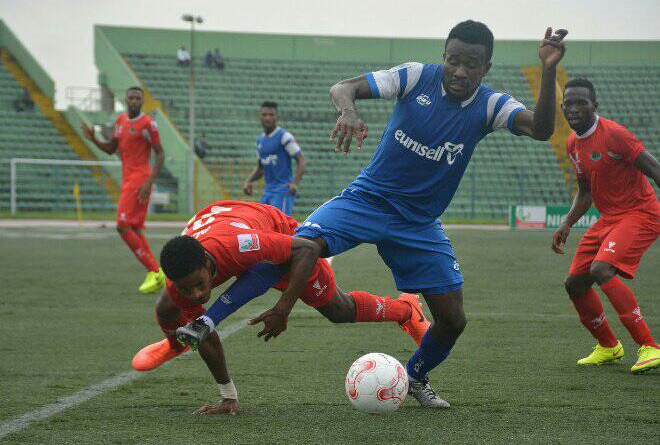 Stephen Odey scored the opening for MFM to underline his 18th this season as his team defeated Katsina United 3-1 at the Agege Stadium in Lagos Monday morning. The match was one of those billed for Sunday in the Nigerian league but a heavy rain in Lagos left the pitch water logged forcing the officials to move the game to Monday, Extrasportsnigeria.com reports.

And on Sunday in Port Harcourt, goals from Guy Kuemian, Emeka Ogbugh and Chiwendu Ali proved decisive for Rivers United in their 3-1 victory over Wikki Tourists on Match day 31.

United, under pressure before kick-off, following a 1-0 reverse in their last home fixture in the NPFL against Sunshine Stars started Sunday’s game with poise, purpose and on the front foot.

An early goal looked likely following such an enterprising start and it was no real surprise when Kuemian headed the ‘Pride of Rivers’ in front in deserved fashion in the 10th minute following an expertly-delivered cross by Ali. They maintained their poise till the end.

Enyimba missed the chance to close the gap on league leaders Plateau United as the Aba side lost 1-0 to Shooting Stars in Ibadan. Abayomi Adebayo scored the only goal of the match in the eighth minute.

In Makurdi, Lobi Stars were forced to a 0-0 draw by league leaders Plateau United. The result did not change anything at the top as Plateau United remain top on 55 points.

At the Godswill Akpabio Stadium in Uyo, title-chasing Akwa United were first shaken before beating Nasarawa United. Nasarawa took a shock 1-0 lead following a 38th minute goal by Aminu Kadir. Ubong Friday equalised for Akwa United with four minutes left in the first half before Christian Pyagbara scored the winner in the 48th minute.

Akwa though still who have a game in hand.