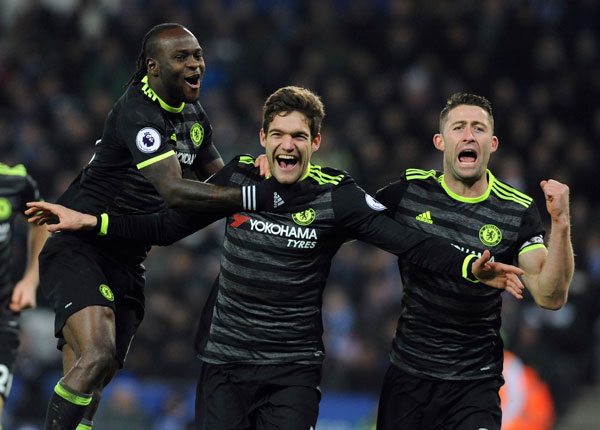 Moses who joined Chelsea from Wigan in 2012 for £9m twitted on Saturday: “CHAMPIONS!!! Words can’t describe the emotions right now! We did this together! #CFC Family!”

Moses’ coach, Antonio Conte says reuniting Chelsea’s fractured team-spirit was the key to their charge to the Premier League title.

“It wasn’t easy for me to arrive in England and try different habits, a different language and inherit players after a bad season. This is a great achievement for the players. I thank them for their commitment and work rate.” Conte said.

“They show me a great attitude to try to do something great this season.”

Conte’s Midas touch was most evident in his switch to a three-man defensive formation following defeats against Liverpool and Arsenal in September.

“That decision changed our season. We had to change and find a new suit for our team. In my mind there was this option to play a 3-4-3 because I knew I had the players to do that,” Conte said.

Chelsea reeled off 13 successive wins after the change and, despite a brief wobble with defeats against Crystal Palace and Manchester United, they coasted to the title in a no-nonsense style befitting their intense boss.

All that’s left for Conte now is to top off his incredible debut season by winning the FA Cup final against Arsenal to clinch the double in two weeks time.

“We were not lucky, we did a great job. It’s important to rest. It is a great season but now we can win the FA Cup,” he said.