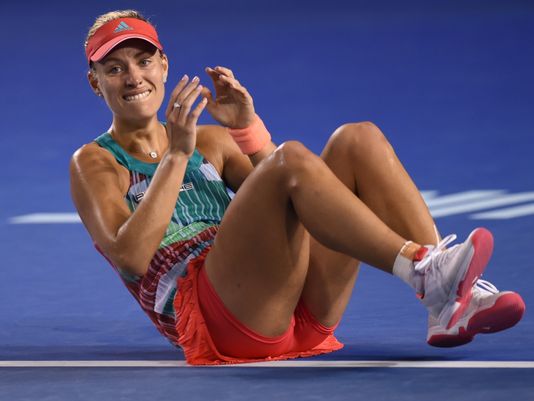 World number ones Andy Murray and Angelique Kerber both crashed out of the Australian Open on a day of major upsets Sunday, as Roger Federer fought his way closer to an 18th Grand Slam title, AFP reports.

The unpredictable results, following six-time champion Novak Djokovic’s stunning loss in the second round, opened the door to a host of challengers – with Federer leading the charge.

Federer, who looks back to full fitness after a six-month injury lay-off, said the hard-fought, fourth-round win could be significant as he now eyes a quarter-final with Zverev.

“This is a huge moment for me in my career,” Federer said.

“I was telling myself, ‘Stay calm’. I feel fit, I’ve trained as hard as I possibly can in the off-season. That’s what you tell yourself and you hope it pays off,” he added.

Murray had been the hot favourite after Djokovic’s shock exit, but the Briton lost 7-5, 5-7, 6-2, 6-4 to Germany’s Zverev to extend his wait for a first Melbourne title.

The Briton was never expected to be troubled by the 29-year-old, who has never won an ATP title, but he suffered his earliest Melbourne departure in eight years.

It isn’t since the 2004 French Open that the top two men’s seeds have gone out before the quarter-finals, and for Murray, a five-time losing finalist, it meant yet more Melbourne misery.

“I’ve had tough losses in my career in the past. I’ve come back from them. This is a tough one,” Murray said.

“I’m sure I’ll come back okay from it. But right now I’m obviously very down because I wanted to go further in this event, and it wasn’t to be.”

Zverev, a former junior rival of Murray’s, stretched to a series of elastic volleys to frustrate the Scot, coming to the net 118 times as he reached his first major quarter-final.

“I was like in a little coma, just serving and volleying my way through it. There were a few points where I didn’t know how I pulled it off but somehow I made it,” he said.

The formidable Swiss, now into his fourth Australian Open quarter-final, will play France’s Jo-Wilfried Tsonga, who came from a set down to beat British surprise package Dan Evans.

Kerber’s maiden Grand Slam title defence, and first major tournament as world number one, ended poorly as she came off distinctly second-best to the aggressive Vandeweghe.

The unseeded American broke Kerber’s serve four times and was on top at the net and from the baseline as she grabbed her first win over a world number one.

In the quarter-finals, Vandeweghe, who halted Eugenie Bouchard in the previous round, faces French Open champion Garbine Muguruza, who swamped Romania’s Sorana Cirstea 6-2, 6-3.

Earlier Venus Williams, the oldest player in the women’s draw at 36, also became one of the first into the last eight when she beat German qualifier Mona Barthel 6-3, 7-5.

The seven-time Grand Slam winner allowed herself to dream of a possible final with her sister Serena, who is steaming through the other side of the draw in search of her 23rd major title.

“That could hopefully happen. We both still have to work very hard to get there,” Venus Williams said.