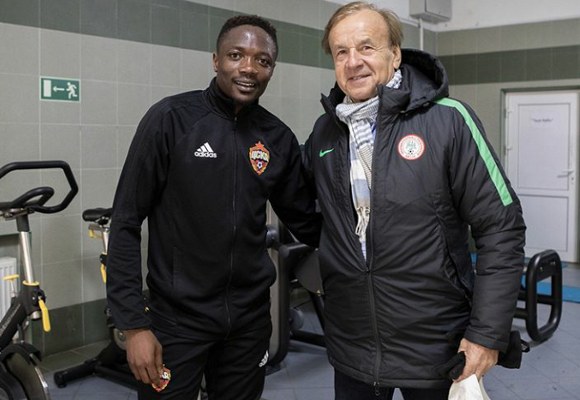 Nigeria and CSKA Moscow forward, Ahmed Musa, has expressed his deep appreciation to the Super Eagles coach, Gernot Rohr. The Nigeria manager paid him a visit at CSKA Moscow as the build up to the 2018 FIFA World Cup in Russia continues.‎

He wrote, “Words cannot express gratitude I am feeling for what you did. I appreciate your generosity. What did I ever do to deserve you?

“You are amazing, a great teacher and have inspired me to excel in the game of football. I stumbled and failed but you taught me never to give up and keep on trying. I just want to say Thank…. Thanks for the visit.”

Musa had to make a return to Moscow after being left out in the cold by Leicester City. Since his return to CSKA Moscow, Musa has scored 3 goals and led the team to the round of 16 of the Europa League.

The Nigeria Football Federation president, Amaju Pinnick said on Friday that the federation had encouraged some of the players to change their clubs and get very active before the World Cup.

The NFF president said the federation had been monitoring the performance of Super Eagles players in their respective clubs. “For instance, goalkeeper Francis Uzoho, Kelechi Ihanacho and others are being monitored in their clubs to ensure they are doing well.

“Also, we have assisted Oghenekaro Otebo to move to UD Las Palmas in Spain to ensure that he plays in a strong league where he can play against world-class players like Lionel Messi.”