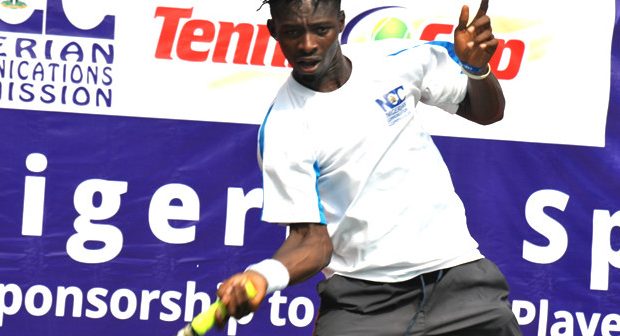 Joseph Imeh, at the moment the hottest player on the Nigerian tennis circuit and Thomas Otu, the immediate past national champion, will have to make vital contributions in the NCC Tennis League semi-final game taking place at the Enugu Sports Club this weekend, Extrasportsnigeria.com reports. Their performance will largely determine if their teams would reach the finals where a jackpot of N7 million awaits the champion team.

Imeh and Otu playing from the Blue and White Groups respectively are yet to lose a match in the League after 10 singles matches. They have always contributed two points from the singles and paired a team mate to win the doubles and the mixed doubles.

And with both players in very good form, tennis followers will have a huge tennis treat when they meet on Saturday and Sunday.

The tie will however be decided by the quality of the backup singles players and the ladies singles. Here, Team Muller’s Emmanuel Idoko who lost to Otu in three sets at the Governor’s Cup in Lagos appears to have a slight edge over Emmanuel Paul, the No.2 player for Team Ndoma-Egba. In the ladies, the expected matchup will be between Ronke Akingbade of Team Muller and Aanu Aiyegbusi of Team Ndoma-Egba.

Last year Aiyegbusi, playing for Team Offikwu, recovered from a set and 1-5 down to beat Akingbade, then of Team Leadway, in the decider in Kaduna. Both players obviously have something to prove and the tennis fans who are storming Enugu from all parts of the South East will have a tennis feast in the hands.

Organisers have also promised that many spectators will go away with some goodies like smart phones – which will be won through raffle draws, recharge cards and tennis caps.

Matches are expected to start at 10am on both days.