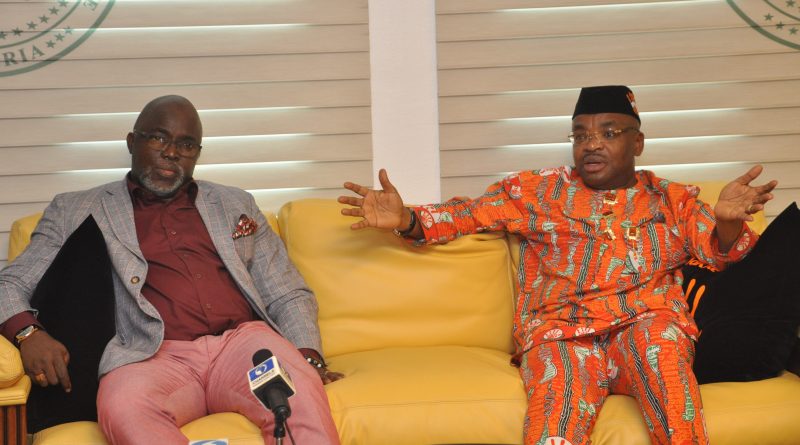 The Nigeria Football Federation and the Akwa Ibom State government have affirmed that the atmosphere in Uyo would be in the best ever when Super Eagles of Nigeria host the Indomitable Lions of Cameroon, Extrasportsnigeria.com reports.
The NFF President Amaju Melvin Pinnick on Tuesday met with Governor Udom Emmanuel of Akwa Ibom and members of the state’s cabinet as the countdown begins for next month’s 2018 FIFA World Cup qualifying match in Uyo.
The NFF President, alongside Chairman of the NFF Technical and Development Committee, Chris Green and Chairman of the Akwa Ibom State Football Association, Emmanuel Iba met with Governor Emmanuel at the Government House in Uyo, where the Governor and his team assured the federation officials that every item on the checklist for organization of the match was being painstakingly attended to.
Pinnick told thenff.com, “We had a useful meeting with His Excellency on all areas concerning organization. The NFF does not want to leave any stone unturned with regards to arrangements for this match.
“While we are doing everything necessary to prepare our team for the big match, we are also fully focused on the organization. Nothing must be left to chance. I am happy His Excellency, Governor Udom Emmanuel and his top officials are on the same page with the NFF. We are confident of having a very successful match on all fronts.”
Eagles welcome reigning African champions Cameroon to Uyo in what could prove one of the deciding games of Africa’s 2018 FIFA World Cup qualifying series’ Group B. Nigeria won the last encounter between the two countries at senior level, when the Eagles lashed the Lions 3-0 in a friendly in Brussels, Belgium on 11th October 2015.
Eagles are at the top of the pool, with six maximum points from two matches, after edging Zambia 2-1 in Ndola in October 2016 and defeating Algeria 3-1 in Uyo the following month. The Lions are second with only two points, after 1-1 draws with Algeria away and Zambia at home.