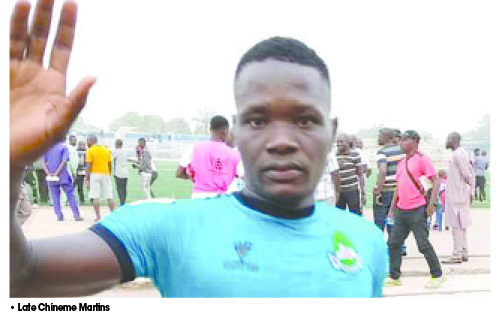 The Nigeria Football Federation’s Adhoc Committee on Safety and Security, set up to unravel the circumstances surrounding the death of Nasarawa United player, Chineme Martins has recommended that the Nasarawa FA should be temporarily suspended from hosting all NFF-organized matches. And this will include all domestic league matches until some clearly stated conditions are met, Extrasportsnigeria.com reports.

They also recommended that the player must be immortalized while his former team Nasarawa United FC should pay a fine of N10million. Martins died during an NPFL game in Lafia on 8th March 2020,

President of the Nigeria Football Federation, Amaju Melvin Pinnick who received their report on Thursday praised the efforts of the Committee.

At the virtual presentation on Thursday, Chairman of the committee, Dr. Peter Singabele (a former Member of the NFF Executive Committee and presently Member of the CAF Committee on Sports Medicine), enunciated the committee’s key findings, submissions and recommendations at both the Samuel Ogbemudia Stadium, Benin City and the Lafia City Stadium where it visited, as well as short-term, medium-term and long-term recommendations to forestall such heartbreaking incident in the future.

In his response, Pinnick was categorical that the country’s football-governing body would study the nitty-gritty of the committee’s recommendations with a view to implementing all.

“I want to give kudos to the chairman and members of this committee for the thorough job they have done. I am not surprised because we brought together perhaps the best team possible in the land for such an assignment.

“Your job was made more arduous given that it was at a time of the COVID-19 pandemic outbreak, and at a time, it was only your committee that was doing any work in football. Yet, you never wavered in painstakingly attending to every detail of the assignment.”

The NFF boss said that the Federation would convey the full report, after it must have been signed by the members and at the resumption of football activities in the country, to the Minister of Youth and Sports Development, Sunday Dare. He also assured that the NFF will compel all the relevant organs concerned with security, safety and medical protocols at domestic matches to up their game, while insisting that any club that fails to comply one hundred per cent with the requirements of the Club Licensing regulations will be barred from competing in the league.

“If at the end of the day, we have to scale down to playing league matches in only a few stadia that can provide functional ambulances and qualified medical personnel with capable referral hospitals, so be it.”

Among the committee’s key findings were: Nasarawa United FC, late Chineme Martins’ club, had neither a medical doctor nor a physiotherapist, with a retired community health assistant heading its medical team, and this led to the mismanagement of the resuscitation process; there was no functional ambulance at the stadium as at the time of the incident, which led to a faulty evacuation process, and the player died before he could reach the hospital and; Nasarawa FA and Nasarawa United FC failed in their duties to put in place emergency medical services for the match.

However, following the refusal of the family of the deceased player to allow for a post-mortem examination on the corpse, the committee could not make a categorical statement on the actual cause of death.

Among the committee’s recommendations are: that all clubs should have a minimum of one qualified medical officer and a physiotherapist; all club players must undergo mandatory PCMA in line with CAF and FIFA standards; clubs must keep adequate medical records of players and officials and; there must be mandatory pre-season basic medical screening.

There were also recommendations on what home teams must provide before games should start; safety and security precautions to be assured by the State Football Association and; sanctions for Nasarawa FA and Nasarawa United FC.

Singabele added: “The Nasarawa FA should be temporarily suspended from hosting all NFF-organized matches (including domestic league matches) until some clearly stated conditions are met. The player must be immortalized. Nasarawa United FC should pay a fine of N10million to the LMC for non-compliance with Club Licensing Regulations and violation of NPFL Framework and Rules, and should pay all financial entitlements of the late Martins immediately, including arrears of salaries and insurance benefits, if any.

“The NFF should empower its Medical Committee, Technical Committee, Club Licensing Department and the LMC to exercise fully their statutory powers and functions.”