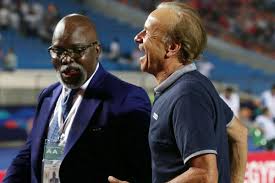 The Nigeria Football Federation met on Monday, 10th August and moved to recruit coaches for the various national teams.

The Board approved that the consulting firm contracted by the NFF should, as soon as possible, submit a shortlist of candidates for the positions of Head Coach of the Super Falcons, NFF Head of Women Football, Head of Compliance Unit and Chief Commercial Officer.

The NFF has also asked its Technical and Development Committee to work in tandem with the NFF Integrity Office to submit to the Board, within the next five (5) days, a shortlist of candidates to be selected by the Board for the position of NFF Technical Director.

Similarly, the Technical and Development Committee is mandated to, in the next one week, and working with the NFF Integrity Office, provide to the Board a shortlist of candidates for the positions of Head Coaches of the U20 and U17 National Women Teams, the U15 Boys National Team, as well as candidates for the position of Consultant on Coaches Training and Development.

The Youth Football Committee is to conclude the modalities for the staging of the first-ever U15 Future Super Falcons’ Tournament, in the mode of the NFF/Zenith Bank U15 Super Eagles Championship that has been running for the past four years.

Pertaining to the preparation of the U20 and U17 Women National Teams for upcoming FIFA Women’s World Cup qualifying matches, the Board announced that having written to the Federal Government through the Federal Ministry of Youth and Sports Development for a special waiver to call the girls to camp, it would await response from the Government before making any moves for the camping programme.