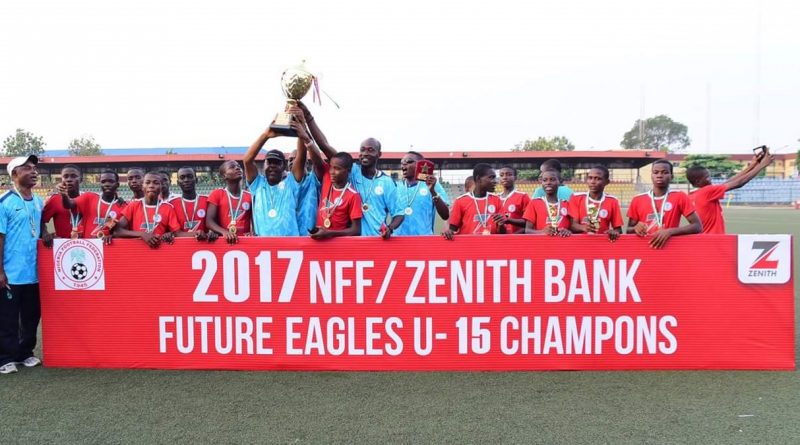 NFF First Vice President and Chairman of the NFF Youth Football Committee, Seyi Akinwunmi was full of excitement on Tuesday, after another successful and highly inspiring conclusion to the NFF/Zenith Bank Future Eagles Championship.

This year’s event was concluded at the Agege Stadium in Lagos. Five days of exciting youth football in Kano came to an exciting finale in Lagos with South East U15 boys emerging champions after a 5-2 spanking of their North West counterparts.

Yet, there were so many talents on display on both sides that Akinwunmi, who is also Chairman of the NFF Football Committee, was much delighted and said, “I am very happy at what I am seeing here. We can safely say the future is here. I had no doubt when we started this programme that we were on to a great thing.

“Indeed, in the next two years or thereabout, we would have no reason to go outside this competition to pick our U17 National Team. We are also emphasizing the importance of combining academics with football. Any player who is unable to do this will be dropped. You can never compare the ball sense and guile of a player who is combining education with football career with that of one who is unable to.”

Most Valuable Player and Top Scorer of this year’s competition, Divine Nwachukwu netted a hat-trick to steer the South Easterners to glory. His goals came in the 32nd, 43rd and 53rd minutes. Franklin Eneh had put South East ahead in the 21st minute, with Oluebube Oguduba sealing victory for them in the 75th minute. Ibrahim Saifulahi netted both goals for equally impressive North West in the 52nd and 60th minutes.

“Football is about catching them young and this is what we are doing. Talented players abound everywhere in this country and you only need look for them to get enough. We will not relent but will even intensify the programme to bring the best from all the zones. My joy is that the sponsors (Zenith Bank) are also happy with this and have expressed immense joy at how this is turning out.

“With the raw talents that we have, all that is left is for us to find ways of exposing them, and we will work very hard at that. We will also ensure we bring the selected players to camp periodically to nurture their talent and add finesse to their game,” Akinwunmi added.

North Central had earlier emerged champions of the U13 competition after defeating South West 4-2 on penalties following a 0-0 draw in Kano at the weekend.

The NFF U15 National Team had earlier wowed dignitaries and spectators with eye –catching performance in a 3-0 defeat of Pepsi Academy in an exhibition match that preceded the final match.