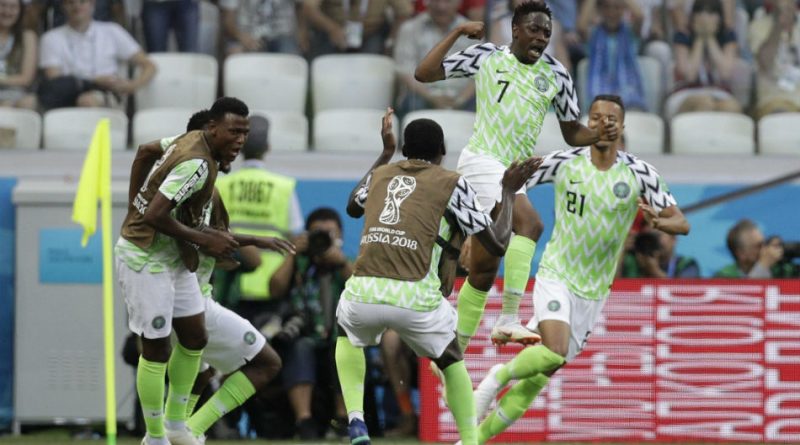 Nigeria and Argentina are getting ready to clash in a potentially explosive match in Saint Petersburg on Tuesday night after the Super Eagles dispatched toughened Iceland 2-0 in Volgograd on Friday night Extrasportsnigeria.com reports.

Iceland and Croatia will square up on the same day as Group D decides the other team to join Croatia in second round.

On Friday, Ahmed Musa, the man who scored Nigeria’s previous two goals at the FIFA World Cup finals (against Argentina in Brazil in 2014), hit a brace and also hit the upright as the Super Eagles brought their Russia 2018 World Cup campaign back on track in Volgograd.

Musa hit Argentina on the counter twice in Porto Alegre on June 25, 2014, though Nigeria lost 2-3 to the eventual finalists. Those were Nigeria’s last goals at the FIFA World Cup before Friday.

Slotted in the starting line-up for the first time in Russia, Musa would prove the man Nigeria needed to renew hope, as he breached the Scandinavians’ defence in the 49th and 75th minute to give the Super Eagles all the points.

There were over 40,000 spectators at the Arena, most of them rooting for Iceland, who had held reigning world vice champions Argentina to a 1-1 draw six days earlier. But the few hundred Nigerians made their voices heard, and on the field, Musa made his mark with a sterling second half endeavour that Nigeria needed to set her campaign in Russia in motion, and in good time.

Defeat by Croatia in Kaliningrad on Saturday kept Nigeria bottom of the table, and a less-than-inspiring first half in Volgograd failed to delight the travelling Nigerian fans.

Iceland, quarter finalists at the Euro 2016, were buoyed by their draw with Argentina, and took the fight to Nigeria for most of the first period, during which the Eagles kept the ball in midfield and failed to launch meaningful onslaughts. Goalkeeper Francis Uzoho had to be on the alert to make some important saves.

However, four minutes into the restart, Musa threw a leg to halt a flying pull-out by Victor Moses, and slammed the ball into the net for Nigeria’s first goal. This was three minutes after Oghenekaro Etebo’s shot after a 50-metre run was easily saved.

With Tyronne Ebuehi replacing Bryan Idowu at left bank, the Eagles looked more surefooted in advancing through that channel and with their first goal at Russia 2018 behind them, the Nigerians launched wave after wave of attacks as Mikel Obi, Wilfred Ndidi, Oghenekaro Etebo and Kelechi Iheanacho probed ceaselessly.

Ndidi’s deflected shot was narrowly over the top; a fierce shot by Moses flew over the bar and; William Ekong and Leon Balogun headed over the crossbar as the Eagles dominated.

In the 75th minute, Musa drove right into the opposition box after a brilliant pass from Kenneth Omeruo, and calmly took his time to pick the right angle before slotting into the net for Nigeria’s second.

Six minutes later, the referee hearkened to the protests of the Scandinavians over an infringement by Ebuehi in the box, and after reviewing his earlier decision, awarded a penalty to Iceland. But the opportunity was blown sky-high.

The Eagles have thus climbed to second place in Group D, with three points, while Argentina and Iceland lag behind with one point each. Croatia have taken the first ticket from the group into the knockout rounds, following their comprehensive 3-0 defeat of Argentina and earlier 2-0 win over Nigeria.