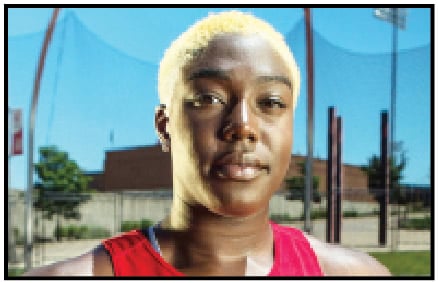 Annette Echikunwoke will be the cynosure of all eyes at the Yaba College of Technology on Saturday when the Athletics Federation of Nigeria 2020 Olympic Trials enter day 3.

The 25 year old USA based athlete will be competing for the first time on Nigerian soil and will be doing so not only as the national leader in the women’s Hammer throw but also as the record holder following her incredible 75.49m throw last month at the USATF Throws Fest in Tucson, Arizona, USA.

No Nigerian woman hammer thrower had hit the 70m mark until Echikunwoke stormed onto the scene and she has thrown above 70m five times this season with her final throw before the Olympic trials the massive national record in Arizona.

With her incredible throw, Echikunwoke has also sealed her place in Team Nigeria’s flight to Tokyo for the athletics event of the Olympics which will start on Friday, July 30 at the Tokyo Olympics Stadium.

Saturday is not all about Echikunwoke though as Ineh Emmeanuel Oritsemeyiwa will also be challenging for the men’s Long Jump title and a ticket to board the Tokyo-bound Team Nigerian flight to Tokyo.

Late last month at the Mickey Miller Blackwell Stadium in Gulf Shores, Alabama, Oritsemeyiwa leapt to a new 8.16m personal best and the mark has given him hope of snatching a ticket to the Olympics.

To do that however, he will have to leap further than his 8.16m personal best as the Olympics standard is 8.22m, 6cm off his best.

If Oritsemeyiwa hits the qualification standard, he will be the first Nigerian since Stanley Gbagbeke in 2012 to hit the 8.20m mark.

In the women’s discus throw, 22 year old Chioma Onyekwere will be hoping she gets the extra energy to throw well beyond her personal season’s best of  63.30m to stand a chance of making her first trip to the Olympics.

The Olympic standard for the event is 63.50m and Onyekwere knows she needs to find that 20cm to book a flight to the Olympics.

There is no such problem for African Games shot put champion, Chukwuebuka Enekwechi who will be aiming for his first national title in the event.

The 23 year old has already thrown himself into Olympics reckoning as he has several marks above the 21.10m standard set for the Games.

While Enekwechi will be relaxed, his compatriot Dotun Ogundeji will not be as he is still fighting to book his Tokyo Olympics-bound flight.

Ogundeji knows he needs to throw at least five centimetres more than the 21.05m he threw in April 2019 to stand a chance of competing at the Olympics for the first time.