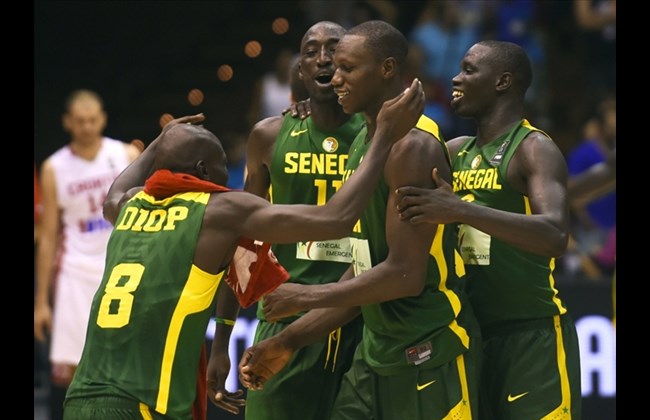 Senegal’s big man Hamady Ndiaye can’t wait to play for his national team again at AfroBasket 2017 because he believes they can do something special this year in spite of the huge status of champions Nigeria. The centre spoke to FIBA.com.

It’s been eight months since Ndiaye and his fellow Senegalese made some noise during the 2016 Manila FIBA Olympic Qualifying Tournament.
Although they fell short of securing a spot at the Rio Olympics 2016, Ndiaye insists the team’s morale couldn’t be any higher.
As Senegal chase a place at FIBA AfroBasket 2017 via this week’s FIBA Africa Zone 2 qualifying tournament against Cape Verde, Guinea and Mali, the seven-footer will be rooting for his national team from the Israeli coastal city Herzliya where he plays for local side Bnei.
He has reported his unavailability to the national team for professional reasons, and as result will miss the qualifier for the 16-team FIBA AfroBasket 2017 in Congo Brazzaville (19-30 August).
Yet, his heart is with his national team which will travel to the Malian capital of Bamako for this week’s first round of the qualifier (17-19). The second round will follow in Dakar a week later.
“I am in regular contact with my national teammates and I think that we are well covered for the tournament,” he noted to FIBA.com. “Hopefully, I will be ready for the African championship. I love playing for my country, and I will always be there to give my best for Senegal.
“I send them a message of encouragement. I know the guys will make us proud. It’s a great opportunity for some of the guys to play for the national team. This qualifier is the beginning of something big.”
Often described as one of the top African national teams, Senegal have hidden their African basketball ambitions.
However, they last won the continental championship as hosts of the FIBA AfroBasket 1997 where they incidentally beat Nigeria in an emotionally charged final match. Nigeria had beaten them in their Group A match in Dakar.
Elusive or not, the FIBA AfroBasket title, Ndiaye says will soon become a reality.
“It’s not a secret our main goal is to win the African championship. Everyone is talking about it and we feel we can do it.”
Even with current African champions Nigeria playing at such high level? He was asked.
“Nigeria are the biggest contender, no doubt about that. We’ve had some great match-ups against them but as the African champions they have to worry about us too.”
Ndiaye has an explanation as to why he feels so confident Senegal’s chances of qualifying for Congo-Brazzaville.
“We have shown the world that we can compete against any team. Why did we fail (at OQT)? Because there are things that need to catch up. We all need to be on the same page to succeed. We have the players; we have the coaching staff and we need a strong administration. Things are getting better and we’ll get there at some point.”
This summer’s FIBA AfroBasket, the 30-year-old believes, will be a game-changer for Senegal basketball.
“(In 1997) I had no a clue what basketball was until I discovered it in 2003. Thinking that we can make history for our country by winning an AfroBasket, it’s a huge motivation for us players.”
Asked to put his professional career in perspective, the former Sacramento Kings player who has travelled the world since leaving the NBA in 2014, said, “I will never say no to the NBA, and the NBA will always be the goal. It’s been a great experience playing in the league but I am chasing a career and stability.”