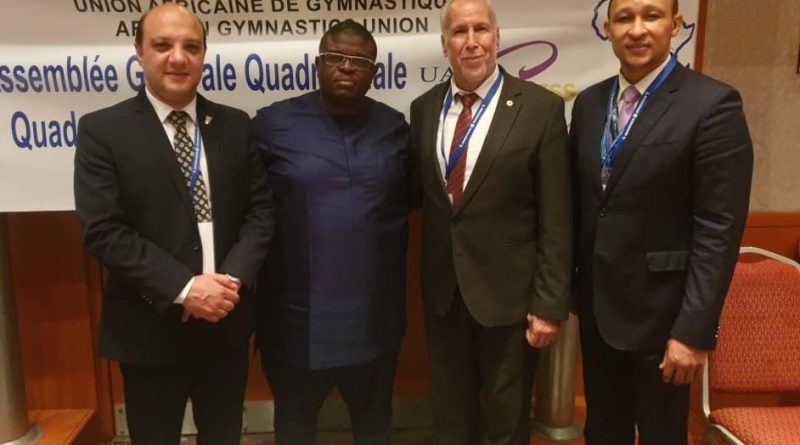 The Nigerian Gymnastics Federation has made history by having, the Development Manager of the federation, Mr Erhunmwunse Otasowie Alexander elected into the Board of the Africa Gymnastics Union. It is for the first time ever in the history of gymnastics in Nigeria.

This historic achievement took place in Antalya Turkey where the World Gymnastics Congress was held, which returned the former President Watanabe from Japan for another four year term.

Earlier in the year Watanabe was in Nigeria for a courtesy visit to the Nigerian Gymnastics Federation President Prince Kelvin Ehizogie Erhunmwunse. It was an effective visit as it eventually paid off as he helped to mobilize his support for his successful re-election as the World President.

Prince Kevin also helped his friend and ally from Egypt to take over the affairs of the Union of Africa Gymnastics defeating the incumbent Ali Zater from Algeria.

The Nigerian Gymnastics Federation President also got an award from the world body for their outstanding performance with Africa and the world at large, thus making Africa proud alongside Egypt and South Africa respectively

No Nigeria in past has ever gotten to this level.

Similarly, a young 23 year old US-based Nigerian Eke Uche  won gold at the African Games in Rabat Morocco in 2019 which gave him the Olympic birth, qualifying for the first time in the history for the Olympics and coached by Oni Erhunmwunse, who is also the Head Coach of Edo State where the athlete comes from.

Uche Eke won a gold medal in All Africa Games in Rabat breaking and bringing back lost glory which was first achieved 21yrs ago in Cairo under the same coach who was at that time an assistant coach to the then national coach.

It was therefore not a surprise under his tutelage to see the young gymnast Eno Etim clear a total of 5 gold medals at the just concluded National Sports Festival tagged Edo 2020 making him the best gymnast from Nigeria at the moment.

The Nigerian president is also investing well on the coaches and the judges as all the zones now have a certified coach. Close watchers of the sport in Nigeria are now hopeful of better days for Nigerians in the international gymnastics scene.

The Minister of Youth and Sports Sunday Dare spoke about Eke Uche like this at the Tokyo Olympics.

“Nigeria Sports Development is on a new trajectory driven powerfully by individual athletes with excellent performances and no person better symbolizes or sign-post the future of our sports development than this young 23- year old youth Uche Eke.”

The African Executive Committee is made of the president, the three Zonal presidents and elected four members to run the gymnastics for Africa.