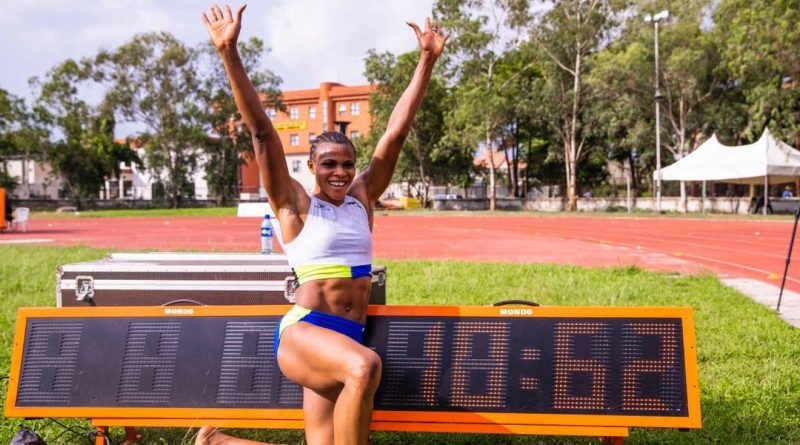 It was a great spectacle for the fans that thronged the Yaba College of Technology Sports Complex in Lagos on Thursday, June 17, as Nigeria’s undisputed queen of the track, Blessing Okagbare and rave of the moment Enoch Adegoke gave them something that will linger in their memories for a long, long time.

It was the opening day of the 2021 National Olympic Games trial.

It was her eighth National 100m title to pull clear of Endurance Ojokolo as the second most decorated sprinter in the blue ribband race after Mary Onyali who won 11 titles.

Okagbare showed a glimpse of what to expect in the semi final heat when she scorched to a 10.99 seconds finish.

Okagbare’s 10.63 seconds finish is the fastest time ever run in the national championship and the 2014 Commonwealth Games double sprint gold medal winner said she is in great form ahead of the delayed 2020 Olympic Games.

“Since the start of this season, I see myself as very ready,” she said.

“I feel healthy, stronger and like the real Blessing Okagbare again. I am really happy that this time came down today; it will boost my confidence, my faith and trust in God.  I just hope this same thing happen at the Olympics.

“I have been working on everything and I hope it counts at the big stage, that’s the Olympics. I was very disappointed at my last meet when I ran 11.2;  I was like this is not me, so when they mentioned the trials, I said I am going to be there, not because I just want to run, but because I really want to compete and run well.

“But above all, I am healthier and when you have good health, the confidence will be there, and I am hoping for the best in Tokyo.

“I have to go to the Olympics, do better than I did or better still replicate it, you might not need to run like this to win the Olympics, at the Games you just want to get to the finishing line.”

In the absence of US-based Divine Oduduru and Raymond Ekevwo, the fans were looking up to Edo 2020 Festival duo of Alaba Akintola and Enoch Adegoke winning the trials.

Akintola however cupped an injury in the semis leaving Adegoke who raced home in a new 10.00 seconds personal best and in the process confirm his place in Team Nigeria’s flight to the Olympics in Tokyo.

Adegoke thought he had made the 10.05 seconds entry standard in the semi final but he was just one hundredth of a second off the time as he was timed 10.06 seconds.