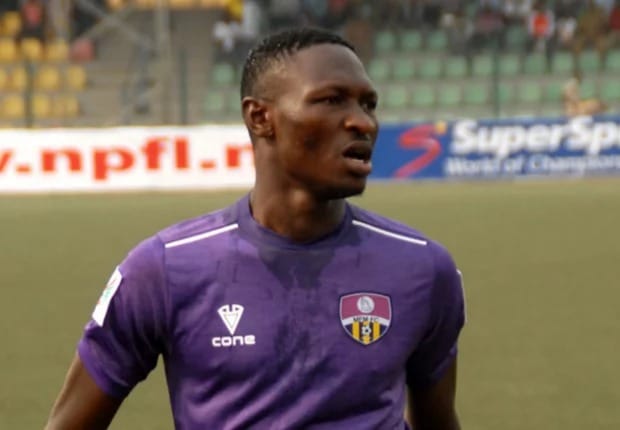 Mountain of Fire and Miracles FC striker, Sikiru Olatunbosun, has dedicated his superb goal which emerged as the Goal of the Week from a poll conducted by Cable News Network (CNN), to God and his family.

The MFM striker received a pass from league’s top scorer Stephen Odey and in a flash dinked the ball past the head of Flying Antelope’s defender Etin before firing home a super volley.

The stadium erupted with wild jubilations as the Lagos based team went on to beat the league defending champions 2-1 at the Agege Stadium.

The game was played on February 24. The beautiful strike doubled MFM FC’s lead against Rangers before Bobby Clement’s goal reduced the deficit to 2-1.

Olatunbosun also hailed his teammates and coaches lstating that all of them had helped to make him a better player.

He said, “I’m dedicating this (CNN Goal-of-the-Week award) first to God and then my family,” the striker told Completesportsnigeria.com Friday night.

“My teammates and the coaches, especially chief coach (Fidelis) Ilechukwu have been wonderful. Without them, I would not have achieved this. The recognition is for all of us.”

Olatunbosun polled 82% of the votes by the respondents to defeat AS Roma’s Radja Nainggolan, Anderlecht’s Y. Tielemans and Woking FC’s Joey Jones.

Manchester City forward Kelechi Iheanacho had previously won the award with his superb goal against Tanzania during the Africa Nations Cup qualifiers; however, Olatunbosun is the first player from the NPFL to win the award.