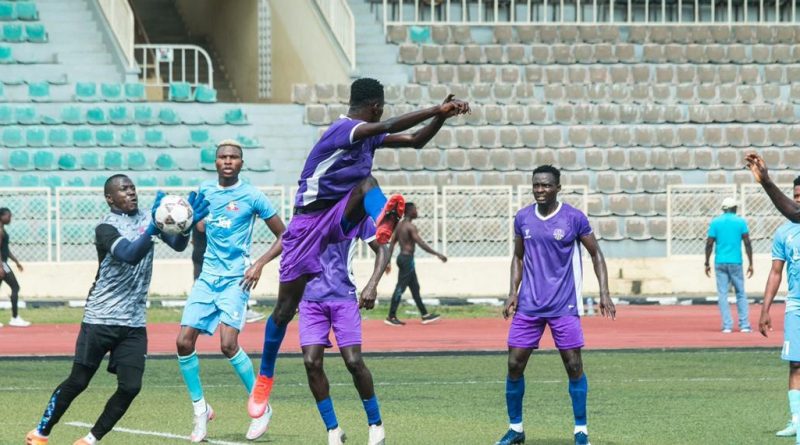 Enugu Rangers stormed to third place on the league table after out-classing Mountain of Fire and Miracle Ministries (MFM) 2-0 for their third win of the season in a game played at the IfeanyiUbah Stadium, Nnewi, Anambra State.

Two first half goals from Tope Olusesi and Ossy Martins in the 16th and on the stroke of halftime took the Flying Antelopes to 11 points from six games but MFM slipped to the 19th spot with six points after they suffered their fourth defeat of the season from six games.

It was the home team that had the first shot on target in the third minute through Martins whose 25 yards shot brought out a top save from MFM’s goalkeeper, Osai Kingdom.

An aerial contest between Rangers’ Ernest Governor and Oludayo Alabi made them seek medical attention in the 16th minute but both were certified to continue after the prompt response of the medical officials.

MFM grew in confidence and got their first shot on target through Adebayo Temim In the 12th minute.

Martins was through on goal for Rangers after some mix-ups in MFM defence in the 15th minute but the former Lobi Stars hitman skied his effort to the delight of goalie Osayi Kingdom.

The opening goal finally came in the 16th minute after a good buildup from Kenechukwu Agu whose inviting cross was met sweetly by onrushing captain Tope Olusesi to slot home through the legs of Osayi Kingdom for Rangers’ curtain raiser.

Rangers could have doubled the lead four minutes after the opening goal but goalkeeper Kingdom made a neat save to deny Rangers a second goal. He was at full length to punch to safety.

The Enugu side were awarded a penalty kick in the 43rd minute after Kingdom was adjudged to have fouled Ugochukwu Ugwuoke in the vital area.

Martins scored from the resultant spot kick in the 12th minute of the first half added time after the Olukoya Boys hesitantly returned to the pitch having initially left the pitch to protest the decision.

The visitors upped their game in the second half and dominated proceedings in the opening 10 minutes of the second half but they were unable to translate their dominance to goal.

Rangers held on tenaciously for the important win and will now proceed to Owerri to face Heartland FC on Wednesday but MFM will return home as hosts to Rivers United, also on Wednesday in Lagos.