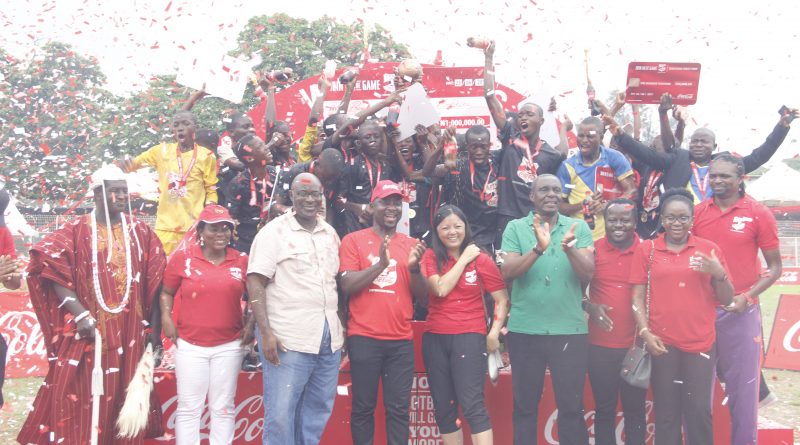 June 23, 2017 started like any other day, but it proved to be unforgettable for Osun State’s Progress Comprehensive High School after defeating rival team, Owerri City College, Imo State, to win the 2017 edition of the Copa Coca-Cola tournament at the national final match played at the Onikan Stadium, Lagos in the South West part of Nigeria.

Determined and focused all through the 60 minutes of play, both teams put up a strong spirited fight for the trophy and the prize money, and the Education Trust Funds, but in the end, the Osun boys were able to pull through with a 1-0 win.

The match, which had in attendance top officials from the Federal Government, Lagos state government, the National School Sports Federation (NSSF), and Senior Staff of Coca-Cola witnessed super engaging musical performance from the popular Nigerian rapper and song writer, ‘Ycee’ and rave of the moment, ‘Lil Kesh’.

Former Super Eagles captains and Olympic gold medallists, Jay Jay Okocha and Kanu Nwankwo, who thrilled the audience with their display of football artistry were, in turn, awed by the young players who sought to outdo them in a precision test stunt dubbed ‘Dare the COPA Legends.’

After the game Okocha said, “Just like many football stars today, my football career began at the grassroots level. Today I am what I am because I had people who believed in me and gave me the opportunity to thrive. Copa Coca-Cola is doing just that, inspiring the next generations of Football players. And I am happy to be a part of a platform that is transforming grassroots football in Nigeria.”

Kanu added, “This year, COPA Coca-Cola is giving back more to the teens. These teens are particularly lucky because, apart from helping to develop their football skills, Coca-Cola is providing them with multimillion naira scholarships and also supporting their schools with funds to improve learning and sporting facilities. This is important because our young ones should not focus on football alone, but also on getting a good education.”

Fourteen year old Lawal Ismail, captain of the winning team, said, “Coming this far in the tournament and winning the grand prizes is such a thrill to me. I am so glad that my team’s hard work paid off. I am also excited to have met Jay-Jay Okocha and Kanu Nwankwo. They are my all-time favourite footballers, and I am still in shock that I got a handshake from the both of them. I will cherish the moment forever.”

Presenting the medals and trophies to the Osun boys, the Marketing Director, Coca-Cola Nigeria, Patricia Jemibewon, congratulated them for their outstanding performances in the tournament, stating that their hard work and team spirit earned them the victory.

She reassured that Coca-Cola will continually create opportunities for talents to thrive. “Through Copa Coca-Cola, teenagers with a passion for football get the opportunity to learn from successful Nigerian international football stars and coaches. By so doing, they showcase their talents to a global audience and build friendships that build bridges across the various social and cultural divides of this great country. We are forever committed to unlocking the potentials of exceptionally talented teenagers because we believe in their passion. Some of the young men you see here today displaying all the amazing football skills would someday become our legends. Coca-Cola is proud to be a part of their journey towards stardom,” she remarked.

Junior Secondary School, Katsina were also not left out of celebration with each player receiving cash prize of N200, 000 education trust fund and a N500, 000 cash prize for the school.

Since 2009, the annual Copa Coca-Cola grassroots football tournament provides the springboard for young football talents to express their passion as they aim for stardom. Thus far, Coca-Cola through the initiative has empowered thousands of Nigerian teenagers. This year’s tournament featured a total of 5000 schools and 110,000 players from across 36 states of the federation and the FCT.