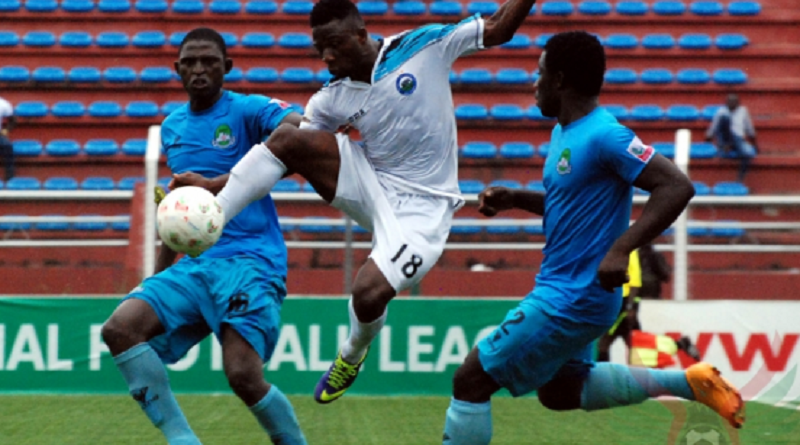 Enugu Rangers and Enyimba, lost their matches in Nigerian league matches on Sunday.

Title holders Rangers were beaten at Rivers United while Kano Pillars hit Enyimba 3-1 in a feisty contest before a packed Sani Abacha Stadium in Kano.

Rivers United needed just 58 second to race into the lead in one of the two big games of the day. Former Nasarawa United midfielder Esosa Igbinoba scored what turned out to be the winner for Rivers United.

The game in Kano produced three goals in the last 30 minutes plus sending off a dramatic finish.

The highlight of the game was Pillars head coach, Kadiri Ikhana, naming a back-four of former Enyimba players. Chinedu Udoji, Bala Zakka, Emmanuel Anyanwu and Idris Aloma started in the defence of Pillars.

Kabiru Balogun scored a brace for the Kano team, becoming the eleventh player to do so this season in the NPFL, and Stephen Chukwude scored for the People’s Elephant from the penalty spot on 69 minutes after Chinedu Udoji got sent off after receiving a second yellow card.

Gambo Mohammed had the final word for Pillars, when he scored on the final minute of the game.

Enyimba coach, Gbenga Ogunbote blamed the loss on the carelessness of the players. Ogunbote said “We had a careless moment in the first goal which we ought to have equalised almost immediately. However, then come the second goal and we had a quick response to find an equaliser from the spot.

“I do not like to complain of officiating it did nothing to help the match or outcome. This game has been played won and lost we will get back to make amend where necessary. Honestly, we had several careless moments in the match and should be a source of worry.”

At the Ifeanyi Ubah Stadium, Nnewi, IfeanyiUbah drew 2-2 with Abia Warriors. Sunday Adetunji put the Warriors in front with his third away goal of the season, after 19 minutes, before Stephen Eze found the equalizer for IfeanyiUbah, after 14 minutes.

Ibeh Johnson scored from a throw-in on 45 minutes, before Ibrahim Adebayo converted the equalizer from the penalty spot, upon Bode Daniel being fouled in the penalty area.