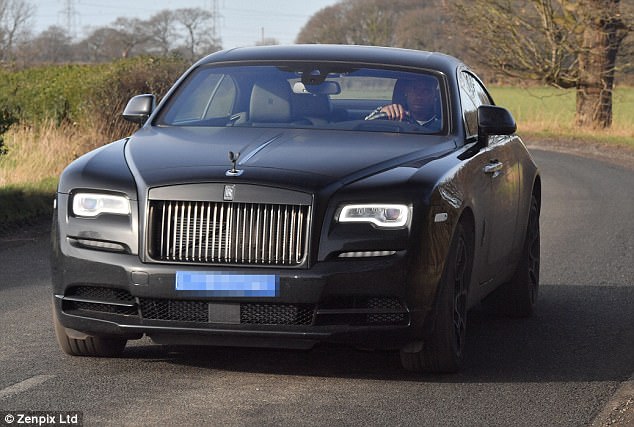 PAUL POGBA’S Rolls-Royce has been seized by the police after he was pulled over for driving with a French number plate.

Officers clocked the Manchester United ace driving his Wraith Black Badge on the M56 and stopped him when he exited near Manchester Airport, according to The Sun report.

Greater Manchester Police took the special edition motor and Pogba, 27, was loaded into the back of the patrol car on the A4538 near Hale, Cheshire.

Foreign cars that have been in Britain for more than six months in a year must be registered with the DVLA and fitted with UK plates.

But if the owner is a UK resident they must register their car within two weeks of importing it.

A witness told The Sun: “We noticed the car going past us on the motorway because it really stands out, but we had no idea who was in it.

“It was already indicating off when the police pulled in behind it and then put the blue lights on after they were safely off the motorway.

“We couldn’t believe it when we saw the driver was Paul Pogba. It looked like he did everything that was asked.

“We wondered what it was all about, he didn’t look like he was speeding or anything.”

The French international – who is set to make his long awaited return from injury – will have seven days to get his car back and will have to stump up £150 as well as £20 for every day it’s held.

But it will be small change for the Red Devils ace who earns £15million a year at Old Trafford.

He will have to show proof of insurance and evidence that he owns the car at the police station to get it back.

A source close to the star said: “He just needs to change his number plate.

“Once he’s done that police are happy for him to take it back on the roads.”

Greater Manchester Police said: “At around 12.55pm, police on a routine patrol in the Trafford area stopped a vehicle on Hale Road.

“The vehicle was seized under section 165 of the Road Traffic Act.

“A 27-year-old man has been reported for driving otherwise in accordance with a UK driving licence.”

The seizure comes ahead of United’s first game back in the Premier League against Spurs on Friday night.

It also follows Pogba being caught doing 40mph in a 30mph limit and hauled before JPs in Preston in 2018.