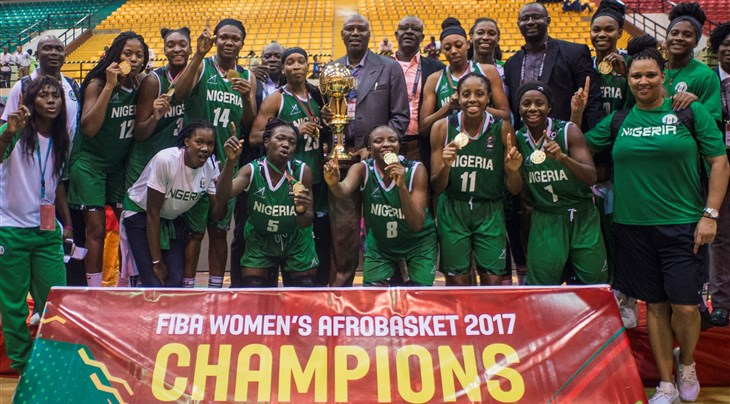 Pius Ayinor
President Muhammadu Buhari is scheduled to receive new African champions D’Tigress after the Federal Executive Council meeting on Wednesday, Extrasportsnigeria.com reports. Sports minister Solomon Dalung announced the Presidential reception for the national women’s basketball team during a reception the ministry held for the team on Tuesday in Abuja.
Nigerian ladies proved more than just a team to the AfroBasket 2017 as they were crowned African champions Sunday night in Mali,. D’Tigress defeated Senegal 65-48 in the final match played in Bamako to round off the 2017 African Nations Cup for Women.
The Nigerian women had already booked a ticket to the 2018 World Cup in Spain simply by qualifying for the final game in Mali when they defeated hosts team in the semi-final. D’Tigress not only won the trophy on Sunday but they also achieved that in a most impactful way by winning all eight matches played in Mali from the group stage through the knock out levels. They will thus campaign in Spain in September 2018 as African champions.
The new champions returned to Nigeria from Bamako on Monday through the Murtala Muhammed Airport, Lagos. Nigeria won the first African cup in Mozambique in 2003 under American coach Sam Vincent who also took charge in Mali this time and Nigeria successfully defended the title in Abuja two years later. The 2017 victory thus makes it the third for D’Tigress.