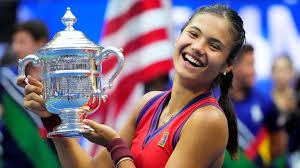 EMMA RADUCANU’S hometown of Bromley hosted a massive celebration party after her US Open triumph.

The sun.co.uk reports that the 18-year-old tennis sensation won ten matches and didn’t drop a single set throughout the tournament.

And she’s gone from finishing A-Levels, to pocketing a cool £1.8million for her win.

Not to mention, Raducanu is the first British woman to win a major final since Virginia Wade won Wimbledon in 1977.

But she grew up playing the game at Parklangley Club in Beckenham, South East London, from the age of six.

Last night the club was crammed with friends and admirers cheering her on.

Harry Bushnell, who coached Raducanu from the age of six to 10, said: “I think it’s a testament to her because she’s such a pleasant person, on and off the court.

“I think that’s why so many people are getting behind her and certainly here at the club.

“Parklangley club will always be behind her every step of the way.”

Suzanne Williams, her former strength and conditioning coach, said: “It’s absolutely incredible just to see her develop and become this player when I knew her when she was so young, from eight to 12 years old.

“Of course you could see there was some incredible potential there but to see her on the screen in this environment is incredible.”

Raducanu paid tribute to her rival after her shock win.

The Brit said: “First of all, I really want to congratulate Leylah and her team, she played some incredible tennis and has beaten some of the top players in the world.

“The level was extremely high and I hope we play each other in many more tournaments and hopefully finals.

“As for this three weeks in New York, I would say having such a supportive team, the LTA my agent, and everyone back home watching on TV, thank you so much for your support over the years.

“Thank you for making me feel so at home from my first qualifying match, you have spurred me on in some difficult moments and I hope me and Leylah put on a good match today.”