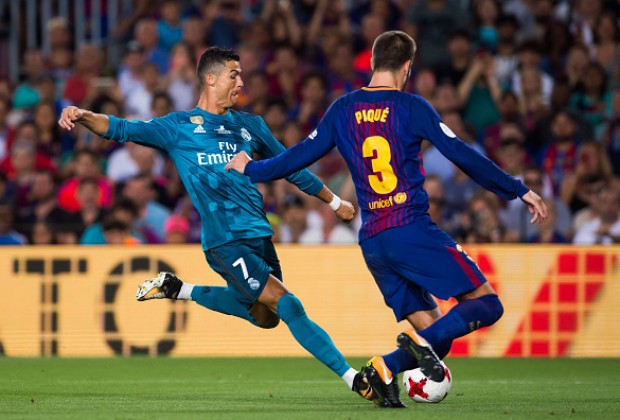 Real Madrid beat Barcelona 3-1 in the first leg of the Spanish Super Cup on Sunday night at the Camp Nou, with Los Blancos finishing the match with 10 players after Cristiano Ronaldo was sent off.
Ronaldo started on the bench for Real, with Barcelona taking the field for the first time in a competitive match since Neymar left the team for Paris Saint-Germain, ESPN reported.
Gareth Bale had the only real chance of the first 45 minutes, stinging the hands of Marc-Andre ter Stegen with a first-time shot from an Isco pass in an uninspired first half from both teams.
The visitors got on the scoreboard early in the second half when Gerard Pique inadvertently redirected a Marcelo cross into his own net past a helpless Ter Stegen.
Jordi Alba saved Barca from going down two in the 55th minute, blocking a point-blank shot from Dani Carvajal after Karim Benzema played a perfect ball across the goalmouth to set him up.
Ronaldo, who came on just before the hour mark, had the ball in the back of the net in the 71st minute, but the linesman’s flag was up for a very close offside call.
And minutes later Sergio Busquets skied a chance at an equaliser well over the bar from just six yards away after the ball found him all alone in front of goal.
Lionel Messi then levelled the match from the penalty spot after Keylor Navas was whistled for taking down Luis Suarez in the area. Real went back in front through a brilliant Ronaldo strike on the counter-attack, cutting inside of Pique and curling home past Ter Stegen to make it 2-1.
The Portugal international was then sent off minutes after the goal, with the referee showing him yellow for diving in the Barca area, making it his second caution of the match after he was carded for taking his shirt off during his goal celebration.
Despite going down a man, Real would add a third. Again on the counter-attack, Marco Asensio turned Pique around and fired a thunderous shot into the goal to cap an impressive evening for Zinedine Zidane’s team.
Barcelona travel to Madrid for the second leg at the Santiago Bernabeu on Wednesday.