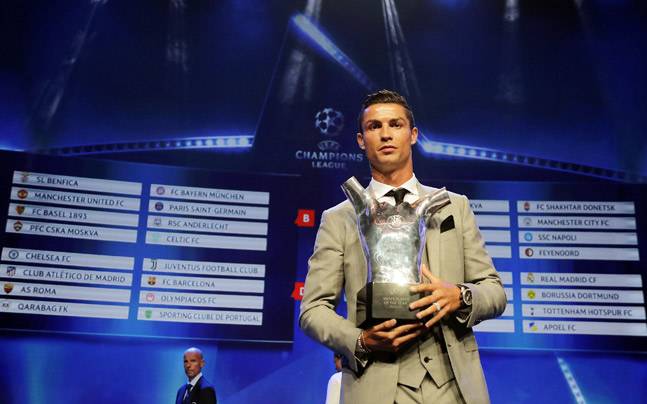 Cristiano Ronaldo has been named UEFA Player of the Year for a second season running.
The Real Madrid forward beat the competition from expectedly Barcelona star Lionel Messi and Juventus goalkeeper Gianluigi Buffon to win the award back-to-back and for the third time overall.
The Portuguese scored 25 goals in the Spanish League last season and another 12 in 13 Champions League which the Madrid team successfully defended.
Previous winners of the award include Messi and Barca team-mate Andres Iniesta, who claimed the prize in the 2011/12 campaign ahead of the Argentina international in second.
But it was not a night for Ronaldo alone. Buffon was named the goalkeeper of the season, Sergio Ramos the top defender, and Luka Modric the best midfielder. Ronaldo was also named UEFA forward of the year ahead of Paulo Dybala and Messi for the award.
Women’s Player of the Year went to Lieke Martens of Barcelona, who swept aside Pernille Harder of Wolfsburg and Dzsenifer Marozsán of Lyon.