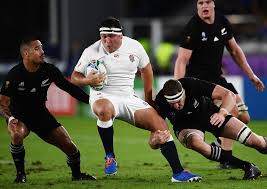 Viewers on DStv and GOtv are about to experience exciting live sporting events and shows on ESPN and ESPN 2 from Saturday 7th to Thursday 12th November.

Top on the line up of events is the Saturday Rugby World Tens 2020 with the semi-finals and final of the tournament showing Live on ESPN (DStv channel 218 and GOtv Max channel 36) at 6:30pm, 7:00pm and 9:00pm respectively while ESPN 2 (DStv channel 219) will feature the playoff on the same Saturday afternoon, with three matches in succession at 3:30pm, 4:00pm and 5:30pm.

Representing the Seattle Seawolves, Ben Cima is enjoying his time with the Aviators. The fly-half is proving influential for his side, having knocked over conversion jeopardy five pointers for fun last weekend.

The American Football enthusiasts will have the NFL aired LIVE at 10:00pm on ESPN (DStv channel 218 and GOtv Max channel 36) on Thursday 12 November, while ESPN 2, DStv Subscribers can watch it same time on Tuesday 10 and Wednesday 11 respectively.

One of the major talking points in the NFL has been the form of Tampa Bay Buccaneers rookie, Antoine Winfield Jr, who says that regular video chats with his father have been key to his success so far.

To conclude the week on ESPN will be the live viewing of the KBO League baseball from Korea on Wednesday 11 November at 10:25am on DStv and GOtv Max while on ESPN 2, NCAA College Football will be the feature presentation from the evening of Saturday 7 into Sunday 8 November, with three consecutive matches which will showcase future stars of the National Football League (NFL) (6:55pm, 9:30pm and 01:30am Live on DStv 219).

Monday 9 November sees live KBO League baseball from Korea (10:25am LIVE on ESPN2 exclusive to DStv and GOtv Max subscribers), while Wednesday also features a National Rugby League (NRL) State of Origin game between the Blues and Maroons at 11:10am LIVE on ESPN 2 (DStv channel 219).

ARLC chairman Peter V’landys believes the post-season State of Origin series will “rate the roof off”, but conceded the NRL has not decided whether to persist with the experimental format in future years. Rather than its traditional timeslot in the winter months, the 2020 State of Origin was pushed back to November following the coronavirus lockdown.