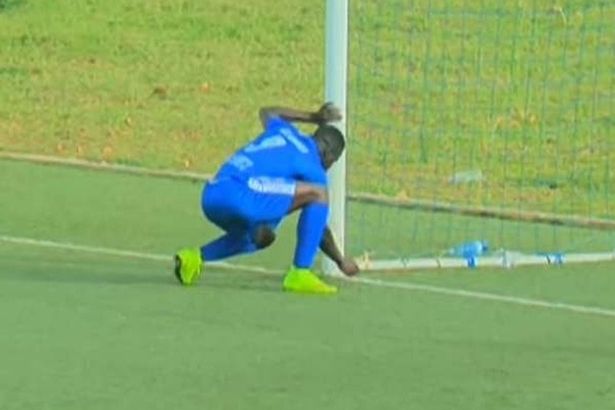 Rwandan football chiefs have been forced to outlaw witchcraft – over fears players are using it to gain an unfair advantage in matches.

In a game between Rwandan Premier League teams Mukura Victory and Rayon Sports, a player apparently performed a ritual mid-game, and within seconds scored a goal, Mirror reported.

In the video footage Rayon’s striker Moussa Camara, whose team was losing 1-0, can be seen missing a goal, by hitting the bar.

He then dashes to the goal and seems to lean a small object against the post.

Camara is then chased away by an angry goalkeeper from Mukura.

But as the game restarts, Camara scores, pulling his team back level. The incident, was one of many that have caused the FA to act.

Vedaste Kayiranga, vice president of the Rwanda FA said, “In FERWAFA (Federation of Rwanda Football Association) statutes we don’t have any law punishing the use of witchcraft because there is nowhere in the world where it has been proven that it can influence the outcome of a game.

“However, with the violence between players because of allegations that one team is using it, we have decided to enact laws.”

Jimmy Mulisa, former Rwandan international added: “It is sad that we still have such beliefs in our football, it does not only give a bad image to the country but kills football development.

It has decided to fine any player seen to take part in witchcraft, with a 100,000 Rwandan Francs fine – equivalent to around £99.

“I think (the FA) should take serious measures against such behaviour.

“Personally, I don’t believe in it, and I had to cut short my playing career because many teams I played for believed in witchcraft which I didn’t.”

The game between Mukura Victory and Rayon Sports ended 1-1.