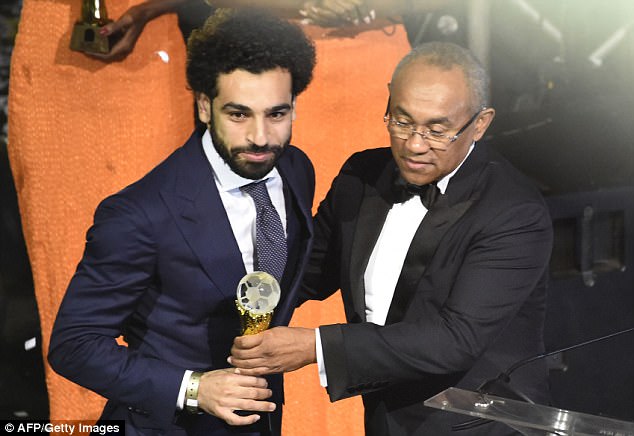 The Egyptian was voted ahead of Gabon’s Pierre-Emerick Aubameyang, and Liverpool’s Sadio Mane in third and second positions respectively.

The award is the second major for Salah having claimed the BBC Player of the Year in December.

Nigeria’s Super Falcons star Asisat Oshoala was named the best female player of the year 2017. Oshoala has now won the award for a record third time.

Salah played a key role in Egypt’s Africa Cup of Nations campaign, where they reached the finals. In addition, he was the joint-top scorer – five goals – in the 2018 African World Cup Qualifiers, guiding Egypt to their first FIFA World Cup since 1990. Salah is the first Egyptian to win the continental award.

Salah said, “Winning this award is a dream come true. 2017 was an unbelievable year for me. I want to dedicate this award to all the kids in Africa and in Egypt, and to tell them to never stop dreaming and believing.”

Oshoala led Dalian Quanjian to the Chinese Women’s Super League championship, the club’s second title in their history. She will be hoping to lead Nigeria to an eighth consecutive FIFA Women’s World Cup in 2019, as qualifying for Africa runs between 17 November and 1 December in Ghana.

A very emotional Oshoala said, “2017 has truly been an emotional journey for me. This is truly one of the best moments in my career. I want to encourage young girls out there to not let people discourage you and to follow your own heart.”