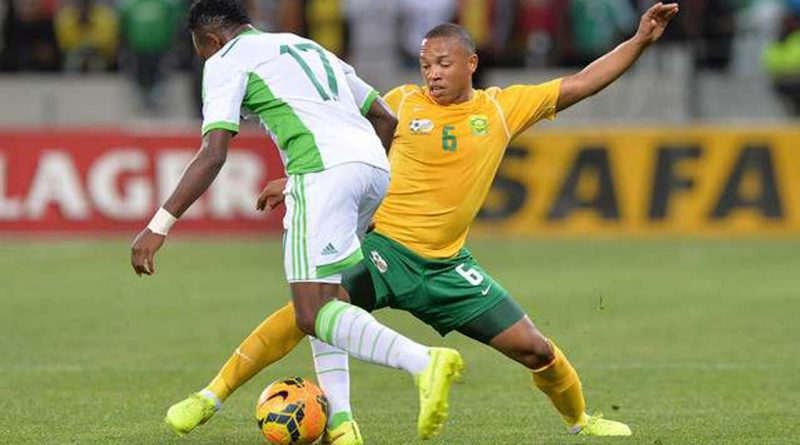 South Africa’s Bafana Bafana claimed a historic victory by defeating Nigeria’s Super Eagles for the first time in a competitive fixture after they deservedly won the game in Uyo, Nigeria 2-0 on Saturday in a 2019 Africa Cup of Nations qualifier.

Tekelo Rantie and Percy Tau scored in the second half to give South Africa their first competitive win over the Super Eagles, as they sit in second place in Group E of the qualifiers, following Libya’s 5-1 win over Seychelles.

The Eagles began the game with a very high spirit, gaining much possession of the ball. Wilfred Ndidi had a chance to open scoring in the 10th minute when he shot wide above the bar.

Nigeria enjoyed the lion’s share of possession in the early stages and midway through the first half the Eagles really should have claimed the lead, with Kelechi Iheanacho providing a low pass across the face of goal to find Oghenekaro Etebo, but his effort flashed wide of the far post.

South Africa came out the better side in the second forty-five minutes, having a compact Defence, and frustrating all Nigerian effort to open scoring.

Tekelo Rantie scored in the 54th minute to gift the Bafana Bafana side with the lead. Rantie who scored the two goals for South Africa in the 2-2 draw the last time both sides met in Uyo, converted a cross by Ramahlwe Mphahlele heading into the net. It was his eleventh goal for the national team.

Nigeria almost got an equalizer on 78 minues when Ahmed Musa and Oghenekaro Etebo threatened in the penalty area, only for Dean Furman to clear out the ball for South Africa.

At 81 minutes, substitute Percy Tau sealed it for the Bafana Bafana when he sprinted, after receiving a cross from Keagan Dolly, and rounded Akpeyi to score in an empty net.

Nigeria next travel to Seychelles in March 2018 to continue the AFCON 2019 qualifiers, as South Africa will host Libya.