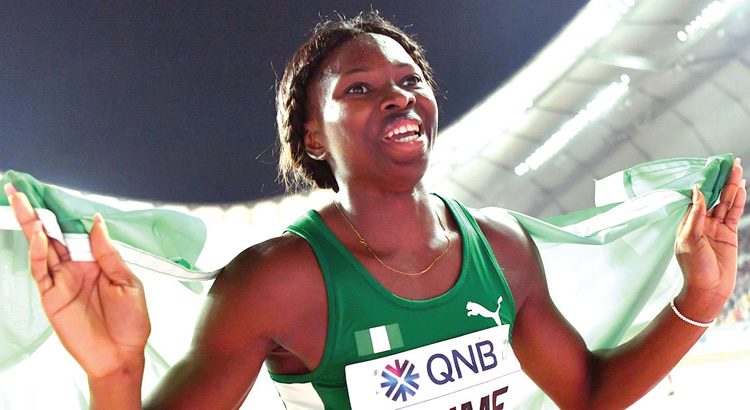 2016 Rio Olympics long jump finalist and bronze medallist at the 2019 World Athletics Championships, Ese Brume and sprinter Grace Nwokocha will be the major attractions as the athletics events of the 20th National Sports Festival begins today at the Samuel Ogbemudia Stadium, in Benin City.

Brume is the overwhelming favourite to successfully defend the long jump title she won at the last edition of the competition in Abuja three years ago.

The Tokyo Olympics bound athlete should hopefully break the 6.62m Festival record she set in 2018.

Nse Uko is the fastest Nigerian so far in the event this year with the 52.07 seconds she ran in Akure last month. Athletics observers are waiting to see if the 21 year old will go under 52 seconds for the first time in her career after coming so close in Akure last month.

In the 100m hurdles, Eseroghene Iro Awusa will be expected to build on the 13.90 seconds she ran to win at the Making of Champions Grand Prix last month in Lagos to win the Festival title. Iro Awusa is the only athlete with a sub 14 seconds performance coming to the Festival.

In the women’s discus, Utitofon James, armed with a new 51.82m personal best set  just about 11 days ago in Lagos is expected to stroll into her first Festival title in the event especially with the expected absence of Nigeria leader in the event, Princess Kara (52.77m) and Chioma Onyekwerre (52.40m).

In the men’s 100m, Edo State’s Enoch Adegoke is expected to continue his dominance of the event at the local front especially after racing to a then world leading time of 10.16 seconds at the end of January.

He however has a new challenger in Favour Ashe who ran a new 10.17 personal best last month at the Making of Champions Grand Prix in Lagos.

It will be a battle royale in the 200m with three of the competitors who have gone under 21 seconds so far this year. On paper Ifeanyi Ojeli will be the favourite to win after running a new 20.78 seconds personal best in Akure in January.

Jerry Jakpa (20.94) and Alaba Akintola (20.97) are expected to be his main challengers.Home boy Orukpe Erayokan will be expected to produce a performance close to the one he gave six years ago in Brazaville, Congo when he scorched to a 44.95 seconds finish if he hopes to retain the 400m title he won three years ago in Abuja.                                  Erayokan is not the fastest 400m runner coming to the Festival. That honour belongs to Sikiru Adeyemi who is the only Nigerian athlete who has dipped inside 46 seconds (45.93) so far this year.