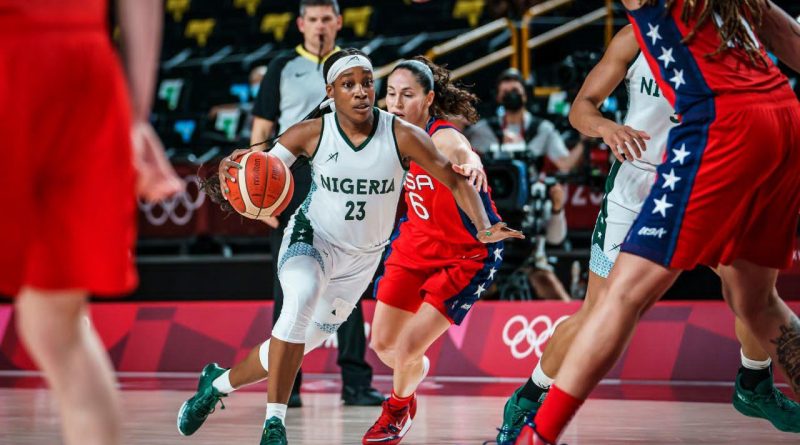 Nigeria’s Minister of Youth and Sports Development, Sunday Dare, has showered encomiums on the national women’s basketball team, D’Tigress, after they narrowly lost to the United States on Tuesday.

He also cheered up the men’s team ahead of their early morning Wednesday game against Germany.

D’Tigress lost 81-72 to the United States in a Group B match played in Saitama. It was a brave performance from the African champions who were less than two weeks ago beaten by the US 93-62 in an exhibition game in Las Vegas.

Since losing at the Barcelona ‘92 Olympics, the US women have now gone 50 games without defeat at the Olympics. But they will be asking themselves how a Nigerian side they recently defeated by 31 points, came close to creating the greatest upset in Olympic women’s basketball history.

And the Minister was impressed by the way the African champions fought throughout the game at the Saitama Super Arena.

“I was at the venue and watched the game from the start to the end. Every moment, I saw players who can fight and they fought.”

The US led by 20 points at the end of the third quarter but a fourth-quarter revival by D’Tigress saw the Nigerians reduce the deficit to five points at a stage in the contest before a late surge from the US rescued the day for the world champions.

“From 20 points disadvantage, I saw them climb back steadily, the height and built of the Americans notwithstanding,” said Dare, before expressing confidence about D’Tigress’ chances in their next game against France on Friday.

“The next game will be better. I trust them. They are like a family. Going up against the Americans like they did, our team is good and can be better.”

D’Tigress take on France on Friday in a game that, based on their performance against the Americans, could see the Nigerians record their first victory at the Olympics since the 2004 Athens Olympics when a Nigerian side led by the legendary Mfon Udoka defeated South Korea 68-64.

Aisha Mohammed-Balarabe, who is in the current D’Tigress team, recorded a game-leading 13 rebounds in that match played 17 years ago in the Greek capital.