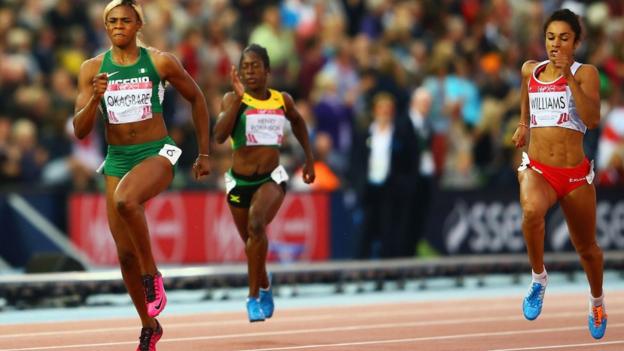 Nigeria queen of the track, Blessing Okagbare, will on Thursday, June 17, face the toughest hurdle at the National Trials as she looks forward to winning her eighth national title

The opening day of the Tokyo 2020 National Trials will see Okagbare competing in the 100m alongside one of the best of the new runners on the track at the moment, Grace Nwokocha.

Since the likes of Damola Osayemi and Gloria Asumnu left the stage, it has been a stroll in the park for Okagbare in major finals, but will have to contend with Nwokocha who also will be on the flight to Tokyo after securing her qualification at the venue of the National Trials, the Yabatech Sports Complex, Yaba, Lagos with a run of 11.09secs, a new Personal Best at the 3rd MoC Grand Prix, before adding the National Sports Festival gold to her collections.

Okagbare’s Season Best stands at 10.90secs, a result she achieved towards the end of May.

The key event for the opening day is the 100m with both the men and women final taking place in the evening.

Apart from the 100m finals expected to take place in the afternoon, there will be shotput men final with all eyes on  Chukwuebuka Enekwechi.

Tobi Amusan will be geared up towards erasing the African Record in the women’s 100m hurdles when she takes to the track in the heat as the men 110m hurdles will be taking place also.

Other events of the opening day are javelin men final and the 5000m men final.

The atmosphere around the Yabatech Sports Complex is currently wearing a new look ahead of the 2021 National Championships and Invitational Relays starting on Thursday, June 17.

The trials, which will be used to select Nigeria’s contingent to the delayed Games of the XXXII Olympics in Tokyo which is scheduled to hold from July 23 to August 8, 2021, will see 11 events taking place on the opening day.

The National Championships is the flagship event of the AFN where the nation’s top athletes will converge to compete for honours and qualifications for major Championships and Games.