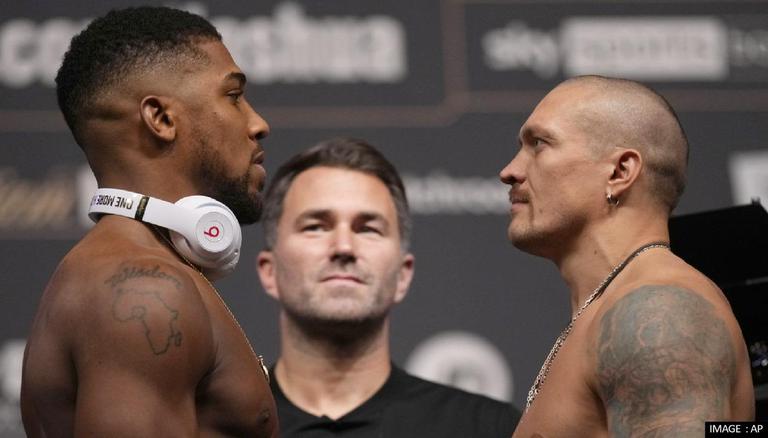 ANTHONY JOSHUA has lost all his belts to Oleksandr Usyk.

Although AJ has a rematch clause in place against Usyk, after what happened at the Tottenham Hotspur Stadium fans might just have given up on him ever meeting the Gypsy King.

Usyk is now a two-weight unified champ, after cleaning up at cruiser.

It was the Ukrainian who made the faster start, a stiff straight jab snapping Joshua’s head back within seconds of the first bell.

He caught Joshua with some mesmerising hooks that already had the crowd wincing.

But the second was a lot better for the reigning champ. Usyk was made to miss a lot although his movement, as expected was asking questions.

Usyk stepped back on the gas in the third, making AJ duck and dive to get out of danger. His jab was also making inroads through the champ’s defence.

And Joshua was rocked off his feet with a brilliant combo towards the end – despite trying to match fire with fire it was Usyk’s round.

The crowd were on their feet at the end of the fifth – and it was the Joshua’s best of the fight so far.

His body shots started to slow Usyk down, and the Ukrainian even started to miss some of his shots.

It was one-way traffic into the sixth as AJ continued to force Usyk onto the back foot, finally using his jab mixed with big rights.

But the visitor to London reminded everyone he wasn’t going anywhere, and had his best round himself in the seventh.

Usyk rocked AJ back with a crunching left, but it was more the Brit’s poor footwork than the power that caught the eye.

Joshua dropped some beautiful uppercuts in the eighth, but each time Usyk looked tired, he was soon back on his tiptoes.

The ninth was an even affair, and despite Usyk finishing with a flurry, AJ landed the eye-catching numbers.

Both boxers were cut on their right eyes in the 10th, but it was AJ’s corner who seemed more concerned.

Joshua sneaked the 11th, but the 12th was all Usyk, with the Brit sagging onto the ropes at the end completely exhausted.