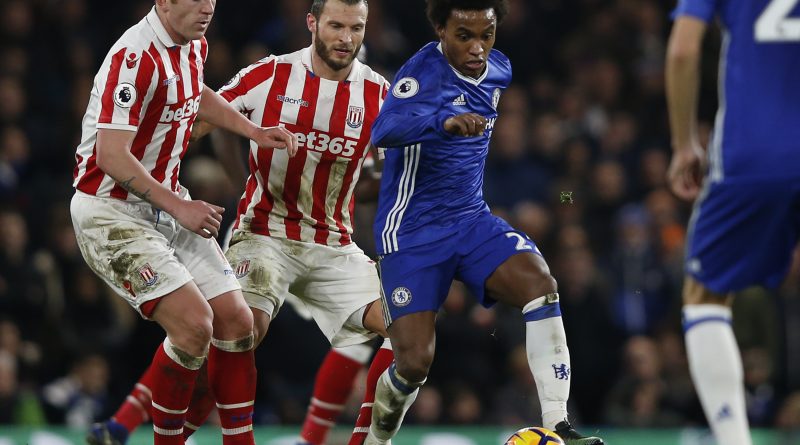 Chelsea equalled Arsenal’s record of 13 consecutive Premier League wins in a season as Willian’s brace inspired a 4-2 win over Stoke on Saturday.

Antonio Conte’s side had a difficult afternoon after twice being pegged back at Stamford Bridge, but they still managed to match Arsenal’s feat in 2001-02 to ensure they enter the new year with a sizeable advantage at the top of the table, AFP reports.

Gary Cahill’s header put Chelsea ahead at the break but Bruno Martins Indi levelled immediately after the restart before Willian restored the lead.

Peter Crouch then gave Stoke a second leveller, only for Willian to pop up moments later before Diego Costa sealed the win.

The leaders were able to recall France midfielder N’Golo Kante and Spain striker Costa after the suspended pair missed the 3-0 home win over Bournemouth on Boxing Day.

They went close to taking the lead as the in-form Eden Hazard beat two men before seeing a shot deflected wide.

Lee Grant came to Stoke’s rescue as he brilliantly kept out a deflected Costa piledriver after he had chested down a Cesc Fabregas cross.

Grant then saved again to deny Cahill from a Fabregas corner, but Stoke looked dangerous when they attacked and Charlie Adam missed a good chance, heading wide from Xherdan Shaqiri’s corner.

However, it was Chelsea who put the pressure on with Grant denying Costa and then Hazard on the rebound.

And from Fabregas’s resulting 33rd-minute corner, England defender Cahill headed home to give Conte’s side the lead with his fourth goal of the season.

Chelsea continued to attack with a Costa free kick just missing the target but Stoke went on to surprise the hosts within a minute of the restart.

Adam’s free kick was headed on by Crouch for Martins Indi to volley home for his first Stoke goal.

Willian drove wide for Chelsea in response as Conte got increasingly animated, while the Brazilian midfielder soon missed the target again.

But the Chelsea manager was soon looking far happier as his team regained the lead on 56 minutes.

Victor Moses got the better of Erik Pieters down the right and Hazard’s touch fell perfectly for Willian to score.

Chelsea continued to attack with Costa driving left footed over the bar following another lay-off from Hazard.

But it was Stoke who were level again on 64 minutes as Crouch caused problems in the box before Bojan Krkic fed Mame Diouf, who crossed for Crouch to convert on the line.

They were level for less than 60 seconds though as Fabregas played in Willian to score his second of the game and fifth of the season with an emphatic finish.

That again had Conte dancing with delight on the touchline as he celebrated amongst the home fans.

Willian missed a chance for a hat-trick as he scuffed his shot wide while Costa missed an even better one, blazing over from Hazard’s pass.

But Chelsea could eventually breathe easily five minutes from time as Costa latched onto a stray Adam header before driving home left footed past Grant for his 14th goal of the campaign.