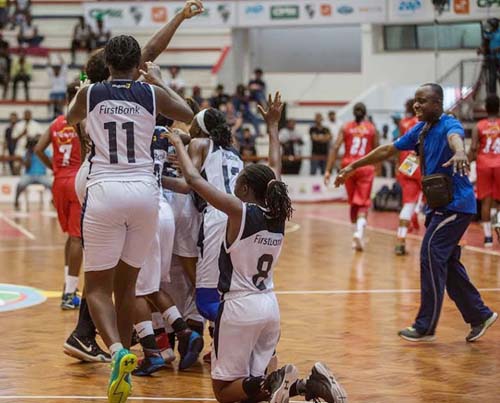 Many thought former Zenith Bank League champions, Dolphins would easily navigate their way around IGP Queens as the Final-8 playoffs of the competition took the tip off in Lagos on Monday but it certainly took a different turn, reports Extrasportsnigeria.com. The game was played at a clutch all through to the buzzer and the Dolphins celebrated a heart-thumbing win at 65-64.

The Dolphins were a point down with 10 seconds of the game left but they had possession from a side throw. The Police ladies laid out what they thought was a good defence to save their one point but in the shuffle of the last seconds the Dolphins technique prevailed. IGP ladies tripled-teamed an opponent right in the arc leaving experienced Bintu Bhadmus to get a pass with the bucket just above her nose. She sank the shot and the buzzer rang out immediately like it was designed to herald the celebration at one end of the National Stadium court and the cry of agony on the other side.

Dolphins coach and owner Wale Aboderin summed up the 40 minutes that played out like 40 hours.

He said, “We had not played them this season and when we considered their heights we knew it was going to be a full day’s job to get even a half point win. And that was exactly what happened.

“But winning or losing isn’t the important thing about this match. We are happy that every minute was well played; we are happy that everyone watching enjoyed the game. This is clearly the match of the day and how wonderful it would be for the development of the women’s league if all or at least many of the games play out like this.”

The IGP coach Abraham Ogaba was lost for words when we demanded his reaction. Perhaps he would be able to speak another day.

The next game of the night was between champions First Bank and Customs. It turned out an anti climax with the Elephant Girls drilling the Customs 115-35. The crowd reduced in number by the minute as the one-sided match went through each quarter.